Before I Go To Sleep: A Novel (Hardcover) 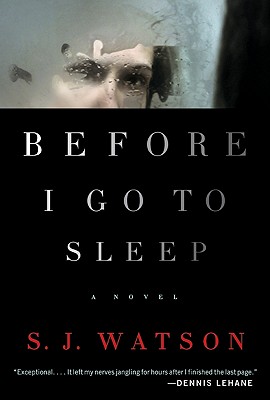 By S. J. Watson
Email or call for price
Special Order is possible. Currently unavailable or possibly out of stock indefinitely. Please contact us before ordering.

A riveting story about a woman with amnesia who can only remember the current day's events until she falls asleep. Every day she awakes remembering nothing. Norm & Alene

“Christine wakes every morning in a state of panic. Due to a horrible accident she has no memory and relies on daily notes from her husband, Ben, to understand her life. That is until Dr. Nash, a neuropsychologist, begins to work with her. Little by little, Christine pieces together her lost memories until she is dangerously close to discovering the truth of her past. This is a psychological thrill ride that, at times, leaves you uneasy, queasy, and afraid of the next twisted turn. I couldn't put it down!”
— Kristin Bates, McLean & Eakin Booksellers, Petoskey, MI

S. J. Watson makes his powerful debutwith this  compelling, fast-paced  psychological thriller,reminiscent of Shutter Island and Memento, in which an amnesiac who,following a mysterious accident, cannot remember her past or form newmemories, desperately tries to uncover the truth about who she is—and whoshe can trust.

S. J. WATSON was born in the Midlands. His first novel was the award-winning Before I Go to Sleep, which has sold more than four million copies in over forty languages, followed by the critically acclaimed novel Second Life. S. J. Watson lives in London.

“An exceptional thriller. It left my nerves jangling for hours after I finished the last page.”
— Dennis Lehane

“Imagine drifting off every night knowing that your memories will be wiped away by morning. That’s the fate of Christine Lucas, whose bewildering internal world is rendered with chilling intimacy in this debut literary thriller. . . . You’ll stay up late reading until you know.”
— People (4 stars)

“The summer’s single most suspenseful plot belongs to BEFORE I GO TO SLEEP. . . . pure page-turner.”
— New York Times

“Quite simply the best debut novel I have ever read.”
— Tess Gerritsen

“Memories—real, false, and a bit of both—are at the heart of Watson’s haunting, twisted debut…. Watson handles what could have turned into a cheap narrative gimmick brilliantly, building to a chillingly unexpected climax.”
— Publishers Weekly (starred review)

“This mesmerizing, skillfully written debut novel works on multiple levels. It is both an affecting portrait of the profound impact of a debilitating illness and a pulse-pounding thriller whose outcome no one could predict.”
— Booklist (starred review)

“An intriguingly fresh look at the amnesia-focused psychological thriller. . . . A captivating and highly suspenseful read, populated with believable characters who lead the reader through a taut, well-constructed plot.”
— Library Journal

“Watson’s debut novel unwinds as a story that is both complicated and compellingly hypnotic. . . . Watson’s pitch–perfect writing propels the story to a frenzied climax that will haunt readers long after they’ve closed the cover on this remarkable book.”
— Kirkus Reviews (starred review)

“A deft, perceptive exploration of a fascinating neurological condition, and a cracking good thriller.”
— Lionel Shriver

“Brilliant in its pacing, profound in its central question, suspenseful on every page and satisfying in its thriller ending.”
— Anita Shreve