The Most Dangerous Thing (Paperback) 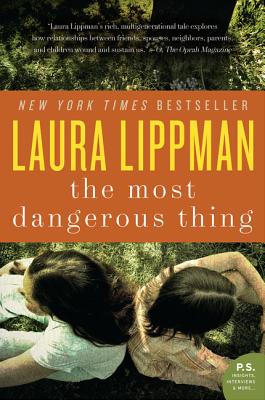 By Laura Lippman
$16.99
We can order this for you!
(This book cannot be returned.)

An absorbing novel about loss and old secrets. Norm & Alene

“The past is always with us, and no one knows that better than Laura Lippman. The not-so-innocent games of five children have consequences that resonate through decades, changing some lives and destroying others. Using narration from various viewpoints, including a haunting collective voice, Lippman once again demonstrates her incisive abilities of observation, which make her one of the finest chroniclers of modern society.”
— Bill Cusumano, Nicola's Books, Ann Arbor, MI

“One of the best novelists around, period.”
—Washington Post

“Lippman has enriched literature as a whole.
—Chicago Sun-Times

One of the most acclaimed novelists in America today, Laura Lippman has greatly expanded the boundaries of mystery fiction and psychological suspense with her Tess Monaghan p.i. series and her New York Times bestselling standalone novels (What the Dead Know, Life Sentences, I’d Know You Anywhere, etc.). With The Most Dangerous Thing, the multiple award winning author—recipient of the Anthony, Edgar®, Shamus, and Agatha Awards, to name but a few—once again demonstrates how storytelling is done to perfection. Set once again in the well-wrought environs of Lippman’s beloved Baltimore, it is the shadowy tale of a group of onetime friends forced to confront a dark past they’ve each tried to bury following the death of one of their number. Rich in the compassion and insight into flawed human nature that has become a Lippman trademark while telling an absolutely gripping story, The Most Dangerous Thing will not be confined by genre restrictions, reaching out instead to captive a wide, diverse audience, from Harlan Coben and Kate Atkinson fans to readers of Jodi Picoult and Kathryn Stockett.

Since Laura Lippman's debut in 1997, she has been recognized as a distinctive voice in mystery fiction and named one of the "essential" crime writers of the last 100 years. Her books have won most of the major awards in her field and been translated into more than twenty languages. She lives in Baltimore and New Orleans with her daughter.