To the Edges of the Earth: 1909, the Race for the Three Poles, and the Climax of the Age of Exploration (Paperback) 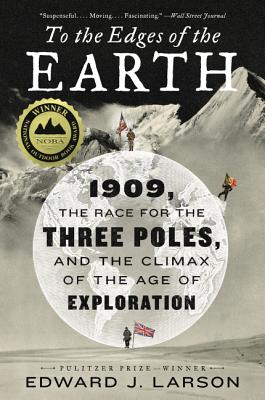 From the Pulitzer Prize-winning historian, a "suspenseful" (WSJ) and "adrenaline-fueled" (Outside) entwined narrative of the race to the top, bottom, and heights of the world: in 1909 three daring expeditions, led by Ernest Shackleton, Robert Peary, and the dashing Duke of the Abruzzi, set out for the North and South Poles and the summit of K2, pushing the limits of human exploration to the extreme.

As 1909 dawned, the greatest jewels of exploration—set at the world’s frozen extremes—lay unclaimed: the North and South Poles and the so-called “Third Pole,” the pole of altitude, located in unexplored heights of the Himalaya. Before the calendar turned, three expeditions had faced death, mutiny, and the harshest conditions on the planet to plant flags at the furthest edges of the Earth.

In the course of one extraordinary year, Americans Robert Peary and Matthew Henson were hailed worldwide at the discovers of the North Pole; Britain’s Ernest Shackleton had set a new geographic “Furthest South” record, while his expedition mate, Australian Douglas Mawson, had reached the Magnetic South Pole; and at the roof of the world, Italy’s Duke of the Abruzzi had attained an altitude record that would stand for a generation, the result of the first major mountaineering expedition to the Himalaya's eastern Karakoram, where the daring aristocrat attempted K2 and established the standard route up the most notorious mountain on the planet.

Based on extensive archival and on-the-ground research, Edward J. Larson weaves these narratives into one thrilling adventure story. Larson, author of the acclaimed polar history Empire of Ice, draws on his own voyages to the Himalaya, the arctic, and the ice sheets of the Antarctic, where he himself reached the South Pole and lived in Shackleton’s Cape Royds hut as a fellow in the National Science Foundations’ Antarctic Artists and Writers Program.

These three legendary expeditions, overlapping in time, danger, and stakes, were glorified upon their return, their leaders celebrated as the preeminent heroes of their day. Stripping away the myth, Larson, a master historian, illuminates one of the great, overlooked tales of exploration, revealing the extraordinary human achievement at the heart of these journeys.

EDWARD J. LARSON received the Pulitzer Prize for History for Summer for the Gods: The Scopes Trial and America’s Continuing Debate over Science and Religion. He is the co-author of Modern Library’s The Constitutional Convention: A Narrative History from the Notes of James Madison and author of The Return of George Washington: Uniting the States, 1783-1789, and A Magnificent Catastrophe: The Tumultuous Election of 1800. He was an inaugural fellow at the National Library for the Study of George Washington. Larson is University Professor of History and holds the Hugh & Hazel Darling Chair in Law at Pepperdine University. He travels widely as a media commentator, visiting instructor, and guest speaker.

“Exciting. ... An adrenaline-fueled look at one of the wildest times in exploration.”
— Outside, “Best New Books”

“Larson recounts three bold expeditions in 1909. ... How badass were these guys? Peary loses eight toes to frostbite but continues undeterred. ... Despite the hardships, it’s hard not to envy living in a time when parts of the world remained unexplored.”
— Men’s Journal (”8 Great New Books to Snag Right Now”)

“Over 100 years ago, in 1909, the North Pole, South Pole, and the highest mountain peaks in the world all remained unclaimed by adventurers, and a generation of explorers were all reaching for those prizes. ... Larson takes us along on three missions, one to each pinnacle of the world.”
— Popular Science (one of “Five Books You Should Read This Month”)

“Shine[s] a light on the adventures of explorers of old. ... Larson writes in an engaging and fast-moving manner in reacquainting us with those heroes of yesterday who’ve slipped into the historical shadows.”
— Minneapolis Star Tribune

“A masterfully written story of incredible adventures against insurmountable odds.”
— JIM WHITTAKER, the first American to summit Mt. Everest, former president/CEO of REI, and author of A Life on the Edge

“Larson delivers riveting tales of stalwart explorers risking their lives for discovery in some of the world’s harshest areas. Their successes and even their failures made them heroes. A fascinating look at the adventures of remarkably resilient men, so well-related as to make you feel the chill.”
— Kirkus Reviews

“A fine psychological study, a story of bravery and obsession and men who pushed themselves to the edge of sanity. … Larson captures the excitement and danger that were the defining characteristics of this age of exploration.”
— Booklist

“Recommended for those who wish to relive a time when the globe still had empty spaces and the men able to fill in those blank areas were rewarded by the world’s adulation.”
— Lincoln Journal Star

"In a fast-paced and eloquent narrative, Larson tells the stories of each of these men as they endure hardships of cold, ice, crevasses, open leads in Peary’s case, and for the men in Antarctica, near starvation."
— Anchorage Daily News