Bigger Than You (Hardcover) 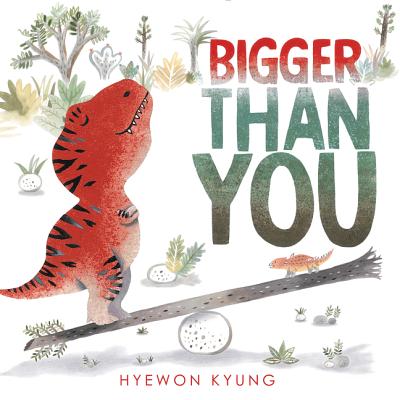 Playground antics have never been so much fun! Young dinosaurs play together on the playground until one dinosaur gets angry and tries to ruin the game for everyone.

This engaging tale is perfectly pitched for preschoolers and for fans of Byron Barton’s Dinosaurs, Dinosaurs and Jane Yolen’s How Do Dinosaurs Say Goodnight?

A group of young dinosaurs builds a seesaw and takes turns playing on it until the bossy, big, and TERRIBLE Tyrannosaurus interrupts their game in a fit of temper. All ends well, though, when Mom steps in and encourages a peaceful and a productive end to the conflict.

Hyewon Kyung’s detailed and humorous illustrations will capture the attention of dinosaur fans, and a dinosaur information chart and educational backmatter about simple machines make this perfect for classroom, family, and story-time sharing!

“I’m bigger than you!” announces the Iguanodon.

“I’m bigger than you!” argues the Triceratops.

“I’m MORE TERRIBLE than you!” yells the Tyrannosaurus.

Hyewon Kyung is the author and illustrator of Bigger Than You. She lives in South Korea.

Hyewon Kyung is the author and illustrator of Bigger Than You. She lives in South Korea.

“Kyung brings principles of simple machines effortlessly to the preschool level in this engaging tale of dinosaurs on a prehistoric playground...This successful mashup of fiction and science, in the style of Jason Chin’s Gravity, is a must-have for early childhood classrooms.”
— Bulletin of the Center for Children’s Books (starred review)

“Dinosaurs, physical action, playful repetition, and things that grow bigger and bigger will grab the attention of even the wiggliest listeners.”
— Publishers Weekly

“The whimsical pictures were created on hanji, traditional Korean paper made from mulberry trees…this simple lesson about sharing uses minimal text, but the message comes through loud and clear. ...will appeal to preschool paleontologists.”
— ALA Booklist

“Curvilinear young dinosaurs rendered in watercolors one-up one another on a seesawing log. ...Can there possibly be too many simple stories about dinosaurs for preschoolers? Of course not! This one will make a big hit at storytime.”
— School Library Journal

“With each turn of the watercolor-dappled page comes a new and slightly larger dinosaur to disconcert the one before. When toothy Tyrannosaurus gets outmatched by colossal Brachiosaurus, he changes the rules: I’m more terrible than you!”...[but] order is restored—and the young reader’s perspective widens—with the arrival of a much larger dinosaur: “Mom!”
— Wall Street Journal