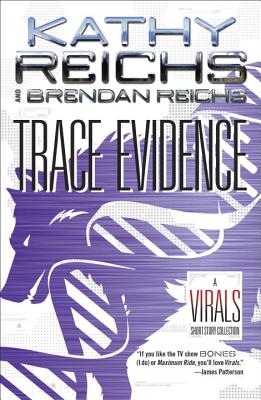 By Kathy Reichs, Brendan Reichs
$9.99
Email or call for price.

A collection of four short stories based on the Virals series from New York Times bestselling authors, Kathy Reichs and Brendan Reichs!

Fans of the Virals series will be thrilled with this companion volume that includes three short stories originally published as eSpecials as well as an all-new, never-before-seen Virals adventure! Shift, Swipe, Shock and the new story Spike give further glimpses of the Virals' world as they work with Tory's famous great aunt, Temperance Brennan, to solve more mysteries, take look at where it all started before they became Virals, and get to the bottom of an attempted sabotage at Kit and Whitney's wedding.

Kathy Reichs, like her iconic character Dr. Temperance Brennan, is a board-certified forensic anthropologist, and creator of the Fox television hit Bones, now in its tenth season. Reichs has written seventeen books in the Temperance Brennan series, all New York Times bestsellers, including #1.

Brendan Reichs was born and raised in Charlotte, North Carolina. He graduated from Wake Forest University in 2000 and The George Washington University School of Law in 2006. After three long years working as a litigation attorney, he abandoned the trade to co-write the Virals series. He lives in Charlotte with his wife, Emily, daughter, Alice, and son, Henry. He plans to keep writing novels until they drag him from his desk.

Praise for the VIRALS series:

"If you like the TV show Bones (I do) or Maximum Ride, you'll love Virals." —James Patterson

"Kathy Reichs gets it dead right with sharp writing and a plot that throws real teens into a deadly adult world." —Anthony Horowitz, New York Times bestselling author of the Alex Rider series

* "Reichs taps into the angst of teens . . . and wraps it all in an entertaining yarn of history, pirates and modern technology." —Kirkus Reviews, starred review of Seizure

"A twist at the end offers a new plot thread beggin to be expanded. Fans will eagerly await the next installment." —Booklist on Exposure