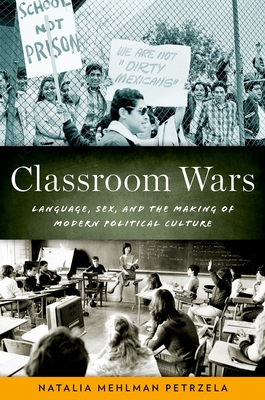 The schoolhouse has long been a crucible in the construction and contestation of the political concept of family values. Through Spanish-bilingual and sex education, moderates and conservatives in California came to define the family as a politicized and racialized site in the late 1960s and
1970s. Sex education became a vital arena in the culture wars as cultural conservatives imagined the family as imperiled by morally lax progressives and liberals who advocated for these programs attempted to manage the onslaught of sexual explicitness in broader culture. Many moderates, however,
doubted the propriety of addressing such sensitive issues outside the home. Bilingual education, meanwhile, was condemned as a symbol of wasteful federal spending on ethically questionable curricula and an intrusion on local prerogative. Spanish-language bilingual-bicultural programs may seem less
relevant to the politics of family, but many Latino parents and students attempted to assert their authority, against great resistance, in impassioned demands to incorporate their cultural and linguistic heritage into the classroom. Both types of educational programs, in their successful
implementation and in the reaction they inspired, highlight the rightward turn and enduring progressivism in postwar American political culture. In Classroom Wars, Natalia Mehlman Petrzela charts how a state and a citizenry deeply committed to public education as an engine of civic and moral education navigated the massive changes brought about by the 1960s, including the sexual revolution, school desegregation, and a dramatic increase in
Latino immigration. She traces the mounting tensions over educational progressivism, cultural and moral decay, and fiscal improvidence, using sources ranging from policy documents to student newspapers, from course evaluations to oral histories. Petrzela reveals how a growing number of Americans
fused values about family, personal, and civic morality, which galvanized a powerful politics that engaged many Californians and, ultimately, many Americans. In doing so, they blurred the distinction between public and private and inspired some of the fiercest classroom wars in American history.
Taking readers from the cultures of Orange County mega-churches to Berkeley coffeehouses, Natalia Mehlman Petrzela's history of these classroom controversies sheds light on the bitterness of the battles over diversity we continue to wage today and their influence on schools and society nationwide.

Natalia Mehlman Petrzela is Assistant Professor of History at The New School and a former public school teacher. Her writing has appeared in The New York Times, Slate, and The Huffington Post. Visit her website at www.nataliapetrzela.com for more information on her writing, teaching, and events.