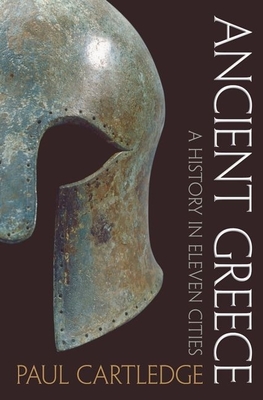 By Paul Cartledge
Email or call for price
Out of Print

The contribution of the ancient Greeks to modern western culture is incalculable. In the worlds of art, architecture, myth, literature, and philosophy, the world we live in would be unrecognizable without the formative influence of ancient Greek models.
This highly original and stimulating introduction to ancient Greece takes the city as its starting point, revealing just how central the polis ("city-state" or "citizen-state") was to Hellenistic cultural achievements. In particular, Paul Cartledge uses the history of eleven major Greek cities--out of more than a thousand--to illuminate the most important and informative aspects of Greek history. The book spans a surprisingly long time period, ranging from the first examples of ancient Greek language from Cnossus in Crete around 1400 BC to the establishment of Constantinople (today's Istanbul) in 324 AD on the site of the Greek city of Byzantion. Cartledge highlights the role of such renowned cities as Athens (birthplace of democracy) and Sparta, but he also examines Argos, Thebes, Syracuse in Sicily, and Alexandria in Egypt, as well as lesser known locales such as Miletus (home of the West's first intellectual, Thales) and Massalia (Marseilles today), where the Greeks introduced the wine grape to the French. The author uses these cities to illuminate major themes, from economics, religion, and social relations, to gender and sexuality, slavery and freedom, and politics. And throughout, the book explores how these eleven cities differed both from each other and from modern society.
An innovative approach to ancient Greece and its legacy, both in terms of the time span covered and in its unique city-by-city organization, this superb volume provides the ideal concise introduction to the history and culture of this remarkable civilization.

Paul Cartledge is the inaugural A.G. Leventis Professor of Greek Culture in the Faculty of Classics, University of Cambridge, and a Fellow of Clare College. He is also Hellenic Parliament Global Distinguished Professor in the History and Theory of Democracy, at New York University. He is the author, co-author, editor and co-editor of over 20 books, many translated into several foreign languages. He is an honorary citizen of modern Sparta and holds the Gold Cross of the Order of Honor awarded by the President of Greece.