Once Upon a Time in Texas: A Liberal in the Lone Star State (Focus on American History Series) (Paperback) 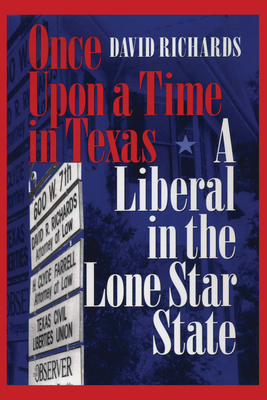 Once upon a time in Texas . . . there were liberal activists of various stripes who sought to make the state more tolerant and more tolerable. David Richards was one of them. In this fast-paced, often humorous memoir, he remembers the players, the strategy sessions, the legal and political battles, and the wins and losses that brought significant gains in civil rights, voter rights, labor law, and civil liberties to the people of Texas from the 1950s to the 1990s. In his work as a lawyer, Richards was involved in cases covering voters’ rights (the creation of single-member districts to address the historic exclusion of minority voters), school finance reform (to address inequities in school funding), and a myriad of civil liberties and free speech cases. In telling these stories, he vividly evokes the “glory days” of Austin liberalism, when a “who’s who” of Texas activists plotted strategy at watering holes such as Scholz Garden and the Armadillo World Headquarters or on raft trips down the Rio Grande and Guadalupe Rivers. Likewise, he offers vivid portraits of liberal politicians from Ralph Yarborough to Ann Richards (his former wife), progressive journalists such as Molly Ivins and the Texas Observer staff, and the hippies, hellraisers, and musicians who all challenged Texas’s conservative status quo. Everyone fascinated by Texas politics and liberal activism in the last half of the twentieth century will enjoy this book. Written with flair and an insider’s insights, it records “a sweeter time when a free-associating bunch of ragtag Texans took on the establishment at a variety of junctures,” as Richards put it.

Today, David Richards lives in Mill Valley, California. An attorney in private practice since 1957, he has also served as head of litigation in the Texas Attorney General’s Office, as general counsel for the Texas AFL-CIO, and as a cooperating attorney fo