The Last Slave Ships: New York and the End of the Middle Passage (Hardcover) 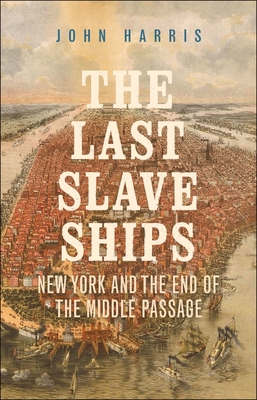 This stunning behind-the-curtain look into the last years of the illegal transatlantic slave trade in the United States represents “a signal contribution to U.S. antebellum historiography.” (Library Journal, Starred Review)

“Uncovers an important—and little known—aspect of both New York City history and the history of the illegal slave trade to Cuba.”—Erin Becker, Global Maritime History

Long after the transatlantic slave trade was officially outlawed in the early nineteenth century by every major slave trading nation, merchants based in the United States were still sending hundreds of illegal slave ships from American ports to the African coast. The key instigators were slave traders who moved to New York City after the shuttering of the massive illegal slave trade to Brazil in 1850. These traffickers were determined to make Lower Manhattan a key hub in the illegal slave trade to Cuba. In conjunction with allies in Africa and Cuba, they ensnared around two hundred thousand African men, women, and children during the 1850s and 1860s. John Harris explores how the U.S. government went from ignoring, and even abetting, this illegal trade to helping to shut it down completely in 1867.

John Harris is assistant professor of history at Erskine College.

"A nuanced and impressive narrative which uncovers an important—and little known—aspect of both New York City history and the history of the illegal slave trade to Cuba."—Erin Becker, Global Maritime History

"[An] engrossing discussion of the closing days of the Atlantic Slave trade."—Bob Cary, Metropole, Blog of the Urban History Association

"Harris is that rare historian who revels in complexity and contradiction and yet manages to also write a clear and gripping narrative."—James Oakes, New York Review of Books

The Victorian Society Book of the Year for 2020

“Harris uncovers the untold story of Lower Manhattan as one of the last hubs of the transatlantic slave trade in the age of steamships, telegrams and daily newspapers. Set against a background of secessionist politics, British spies, and international diplomacy, the author elegantly tracks the last sixteen years of the traffic and offers a new interpretation of why it came to an end. This page-turner combines first rate scholarship with a clear and compelling argument.”—David Eltis, co-author of Atlas of the Transatlantic Slave Trade

“Brilliant and strikingly original. An important addition to the literature on the U.S. involvement in the illegal slave trade with major implications for our understanding of the larger conduct of that traffic throughout the Atlantic world.”—Randy J. Sparks, Tulane University

“With startling detail and crisp prose, Harris exposes an international ring of human traffickers based in Lower Manhattan during the final years of the transatlantic slave trade. Today, as the United States scrutinizes the roots of anti-black racism and the traumatic legacies of slavery, The Last Slave Ships reveals new dimensions of U.S. complicity in the twinned history of global capital and chattel slavery.”—Sharla Fett, author of Recaptured Africans: Surviving Slave Ships, Detention, and Dislocation in the Final Years of the Slave Trade