Don't Know Much About History, Anniversary Edition: Everything You Need to Know About American History but Never Learned (CD-Audio) 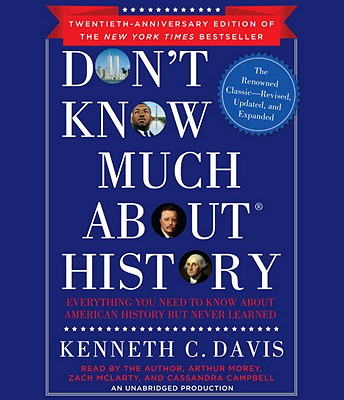 Here, celebrating the twentieth anniversary of its debut as a New York Times bestseller, is the revised, updated, and expanded edition of the classic anti-textbook that changed the way we look at history. First published two decades ago, when the “closing of the American mind” was in the headlines, Don’t Know Much About® History proved Americans don’t hate history—just the dull version that was dished out in school.

Now Davis has brought his groundbreaking work up to the present, including the history of an “Era of Broken Trust,” from the end of the Clinton administration through the recent Great Recession. This additional material covers the horrific events of 9/11 and the rise of conspiracy theorists, the wars in Iraq and Afghanistan, Hurricane Katrina and the failure of the New Orleans levees, the global financial meltdown, the election of Barack Obama, and the national controversy of same-sex marriage.

Kenneth C. Davis is the New York Times bestselling author of A Nation Rising; America’s Hidden History; and Don’t Know Much About® History, which sold more than 1.6 million copies, and gave rise to his phenomenal Don’t Know Much About® series for adults and children. He blogs regularly at www.dontknowmuch.com.