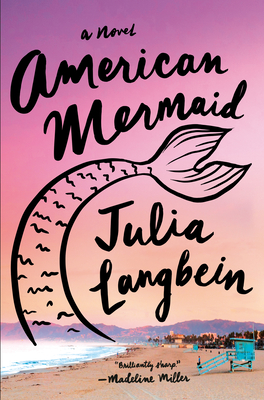 A brilliantly funny debut novel that follows a writer lured to Los Angeles to adapt her feminist mermaid novel into a big-budget action film, who believes her heroine has come to life to take revenge for Hollywood's violations.

"Brilliantly sharp, funny, and thought-provoking, the gripping story of a woman trying to find her way in our chaotic world." —Madeline Miller, bestselling author of Circe

Broke English teacher Penelope Schleeman is as surprised as anyone when her feminist novel American Mermaid becomes a best-seller.  Lured by the promise of a big payday, she quits teaching and moves to L.A. to turn the novel into an action flick with the help of some studio hacks. But as she's pressured to change her main character from a fierce, androgynous eco-warrior to a teen sex object in a clamshell bra, strange things start to happen. Threats appear in the screenplay; siren calls lure Penelope’s co-writers into danger.  Is Penelope losing her mind, or has her mermaid come to life, enacting revenge for Hollywood’s violations?

American Mermaid follows a young woman braving the casual slights and cruel calculations of a ruthless industry town, where she discovers a beating heart in her own fiction, a mermaid who will fight to move between worlds without giving up her voice. A hilarious story about deep things, American Mermaid asks how far we’ll go to protect the parts of ourselves that are not for sale.

JULIA LANGBEIN, a sketch and standup comedian for many years, holds a doctorate in Art History and is the author of a non-fiction book about comic art criticism (Laugh Lines, Bloomsbury Visual Arts, 2022). She wrote the viral comedy blog The Bruni Digest (2003-7), which reviewed New York Times critic Frank Bruni's restaurant reviews every week and has since written about food, art and travel for Gourmet, Eater, Salon, Frieze and other publications. A native of Chicago, she lives outside of Paris with her family.

Named a Most Anticipated Book of the Year by LitHub

“A comedy of wordplay. A superhero adventure. A Hollywood takedown. A hoot and a half. American Mermaid is all of these, and more. So witty and marvelous you won’t be able to put it down. So pick it up!”
—Andrew Sean Greer, Pulitzer Prize winning author of Less Is Lost

"I was hooked from the first page. American Mermaid is brilliantly sharp, funny, and thought-provoking, the gripping story of a woman trying to find her way in our chaotic world."
—Madeline Miller, #1 New York Times bestselling author of Circe and The Song of Achilles

"American Mermaid is shapeshifting novel composed of wildly divergent elements—a biting Hollywood satire, a magical realist book-within-a-book, and a moody meditation on identity and selling out. It probably shouldn’t work, but it succeeds brilliantly, thanks to Julia Langbein’s tonal control and wicked sense of humor. This is a a debut novel of unusual ambition and scope."
—Tom Perrotta, author of Tracy Flick Can't Win and Mrs. Fletcher

“American Mermaid is, like a mermaid herself, a beautiful mix of two things. It is a brilliantly funny and perfectly modern satire, as well as being an elegant exploration of soulfulness, longing and belonging, and the ungovernable wildness of nature herself. I’ve never read anything quite like it, and I loved it.”
—Elizabeth Gilbert, bestselling author of City of Girls

"Every time I picked up this book I both laughed out loud and sighed in admiration. Deeply hilarious, delightfully strange, intricately constructed and remarkably satisfying, American Mermaid is sensational."
—Julia May Jonas, author of Vladimir

“An absolute weirdo masterpiece. With her debut, Julia Langbein pulls off an impressive tonal tightrope walk that would send a lesser writer stumbling to the ground. American Mermaid manages to be so many things at once—a zany and savage satire about Hollywood, a tale of magical realism, and an aching story about what comes after you achieve your dream, how the depths of your ambition can swallow you whole. This novel is both a pleasure to read and signals the arrival of an exciting new writer to watch.”
—Jean Kyoung Frazier, author of Pizza Girl