Talking to Canadians: A Memoir (Paperback) 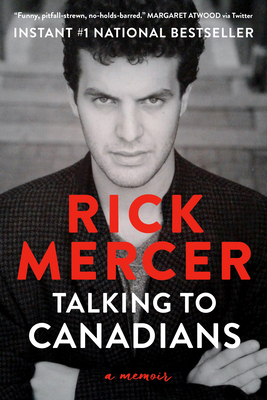 Canada's beloved comic genius tells his own story for the first time.

What is Rick Mercer going to do now? That was the question on everyone's lips when the beloved comedian retired his hugely successful TV show after 15 seasons—and at the peak of its popularity. The answer came not long after, when he roared back in a new role as stand-up-comedian, playing to sold-out houses wherever he appeared.

And then Covid-19 struck. And his legions of fans began asking again: What is Rick Mercer going to do now? Well, for one thing, he's been writing a comic masterpiece. For the first time, this most private of public figures has turned the spotlight on himself, in a memoir that's as revealing as it is hilarious. In riveting anecdotal style, Rick charts his rise from highly unpromising schoolboy (in his reports "the word 'disappointment' appeared a fair bit") to the heights of TV fame. Along the way came an amazing break when, not long out of his teens, his one-man show Show Me the Button, I'll Push It. Or, Charles Lynch Must Die, became an overnight sensation—thanks in part to a bizarre ambush by its target, Charles Lynch himself. That's one story you won’t soon forget, and this book is full of them.

There's a tale of how little Rick helped himself to a tree from the neighbours' garden that's set to become a new Christmas classic. There's Rick the aspiring actor, braving "the scariest thing I have ever done in my life" by performing with the Newfoundland Shakespeare Company; unforgettable scenes with politicians of every variety, from Jean Chretien to George W. Bush to Stockwell Day; and a wealth of behind-the-scenes revelations about the origins and making of This Hour Has 22 Minutes, Made in Canada, and Talking to Americans. All leading of course to the greenlighting of that mega-hit, Rick Mercer Report . . .

It's a life so packed with incident (did we mention Bosnia and Kabul?) and laughter we can only hope that a future answer to "What is Rick Mercer going to do now?" is: "Write volume two."

RICK MERCER co-created and performed on CBC's This Hour Has 22 Minutes, created and starred in Made in Canada, and created and starred in Talking to Americans, the most-watched comedy special in Canadian television history. He went on to host the hugely successful Rick Mercer Report for 15 seasons. Rick was appointed an Officer of the Order of Canada in 2014 for his work with charitable causes and "his ability to inspire and challenge Canadians through humour." In 2019, he received a Governor General's Performing Arts Lifetime Artistic Achievement Award. He is from Middle Cove, Newfoundland and Labrador.

"Talking to Canadians: [a] funny, pitfall-strewn, no-holds-barred memoir from the ranting TV uproarist, edge-walker, envelope-pusher and pot-stirrer who once talked me into impersonating a goalie!" —Margaret Atwood, via Twitter

"I laughed so much reading this, I kept waking up my dog in bed. Rick is a determined writer—he never stops pulling you into his stories and he never stops looking for the punchlines in everyday life. He made me realize how funny ordinary things are, how funny and how incredibly interesting. It's heartfelt and honest and generous and edgy—just like Mercer himself. Read it! It's fabulous!" —Jann Arden

"A delightful and warm-hearted memoir." —Chatelaine

"[Talking To Canadians] details the evolution of Rick Mercer as a national treasure, who through a well-informed mind, a sense of boundless energy, a fearless attitude of diving into everything head first, and a sharp, rapier wit, has continued the proud tradition of Canadian comedy. If there is one thing that you can take away about Rick Mercer after reading his book, it's that he is definitely not afraid to speak his mind and shoot down the absurdities of everything in Canada and the world, while proudly draped in the Canadian and Newfoundland-Labrador flags." —Montreal Times

"When Mercer was in the midst of writing his new memoir . . . he told a friend that his biggest concern was that 'my childhood was wonderful and my family members are terrific, so how the hell can I make this book exciting?' The answer, as the thoroughly engaging final product makes clear, is that Mercer is incapable of being boring. [His] passion—for Newfoundland, all of Canada and the people who live within—sparks the fire that feeds Mercer's trademark rants. It is also evident throughout this alternately funny, moving and always heartfelt book." —Policy Magazine

"[Rick Mercer is] an interesting person who has done singularly interesting things, many recorded and broadcast, which makes the inside back story most engaging and enjoyable. Add Mercer’s brisk, informative contextualization . . . and Talking is an immersive read." —Calgary Herald