The Case of the Left-Handed Lady: An Enola Holmes Mystery (Hardcover) 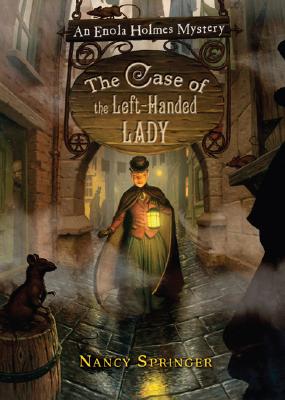 Enola Holmes is hiding from the world’s most famous detective—her own brother, Sherlock Holmes. But when she discovers a hidden cache of bold, brilliant charcoal drawings, she can’t help but venture out to find who drew them: young Lady Cecily, who has disappeared from her bedroom without a trace. Braving midnight streets where murderers roam, Enola must unravel the clues—a leaning ladder, a shifty-eyed sales clerk, political pamphlets—but in order to save Lady Cecily from a powerful villain, Enola risks revealing more than she should . . .

In her follow-up to The Case of the Missing Marquess, which received four starred reviews, two-time Edgar Award winner Nancy Springer brings us back to the danger and intrigue of Victorian London as she continues the adventures of one of the wittiest and most exciting new heroines in today’s literature.

Nancy Springer has published forty novels for adults, young adults and children. In a career beginning shortly after she graduated from Gettysburg College in 1970, Springer wrote for ten years in the imaginary realms of mythological fantasy, then ventured on contemporary fantasy, magical realism, and women's fiction before turning her attention to children's literature. Her novels and stories for middle-grade and young adults range from contemporary realism, mystery/crime, and fantasy to her critically acclaimed novels based on the Arthurian mythos, I AM MORDRED: A TALE OF CAMELOT and I AM MORGAN LE FAY. Springer's children's books have won her two Edgar Allan Poe awards, a Carolyn W. Field award, various Children's Choice honors and numerous ALA Best Book listings. Her most recent series include the Tales of Rowan Hood, featuring Robin Hood's daughter, and the Enola Holmes mysteries, starring the much younger sister of Sherlock Holmes. Ms. Springer lives in East Berlin, Pennsylvania.