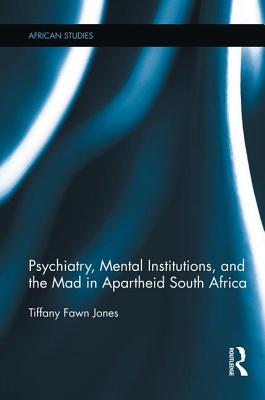 By Tiffany Fawn Jones
$60.45
Not available

In the late 1970s, South African mental institutions were plagued with scandals about human rights abuse, and psychiatric practitioners were accused of being agents of the apartheid state. Between 1939 and 1994, some psychiatric practitioners supported the mandate of the racist and heteropatriarchal government and most mental patients were treated abysmally. However, unlike studies worldwide that show that women, homosexuals and minorities were institutionalized in far higher numbers than heterosexual men, Psychiatry, Mental Institutions and the Mad in Apartheid South Africa reveals how in South Africa, per capita, white heterosexual males made up the majority of patients in state institutions. The book therefore challenges the monolithic and omnipotent view of the apartheid government and its mental health policy.

While not contesting the belief that human rights abuses occurred within South Africa's mental health system, Tiffany Fawn Jones argues that the disparity among practitioners and the fluidity of their beliefs, along with the disjointed mental health infrastructure, diffused state control. More importantly, the book shows how patients were also, to a limited extent, able to challenge the constraints of their institutionalization. This volume places the discussions of South Africa's mental institutions in an international context, highlighting the role that international organizations, such as the Church of Scientology, and political events such as the gay rights movement and the Cold War also played in shaping mental health policy in South Africa.

Tiffany Fawn Jones is an Assistant Professor of African History at California State University, San Bernardino, California. Her research interests lie in the intersection between ideas of health, race, gender, sexuality and power structures in Africa. She has published widely and is the book review editor for Notes and Records: an International Journal on Africa and the African Diaspora.