The Other Typist: A Novel (Paperback) 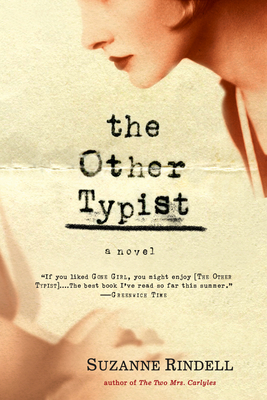 By Suzanne Rindell
$16.00
On Our Shelves Now

I couldn’t put this down!  It is told through the eyes of Rose, a typist at a local NYC precinct in the 1920’s. A captivating new typist named Odalie is hired, and soon Rose finds herself under her spell.   Denise

Perfect for fans of Lara Prescott's The Secrets We Kept, this haunting debut novel--and Kirkus Reviews Best Book of the Year--is set against the background of New York City in the 1920s…

Confessions are Rose Baker’s job. A typist for the New York City Police Department, she sits in judgment like a high priestess. Criminals come before her to admit their transgressions, and, with a few strokes of the keys before her, she seals their fate. But while she may hear about shootings, knifings, and crimes of passion, as soon as she leaves the room, she reverts to a dignified and proper lady. Until Odalie joins the typing pool.

As Rose quickly falls under the stylish, coquettish Odalie’s spell, she is lured into a sparkling underworld of speakeasies and jazz. And what starts as simple fascination turns into an obsession from which she may never recover.

Suzanne Rindell is the author of The Other Typist and Three-Martini Lunch. She has published her short fiction and poetry in Conjunctions (online), Nimrod, storySouth, Crab Orchard Review, and Cream City Review. Rindell lives in New York City.

Praise for The Other Typist

“From the first page [I] was absorbed...Suzanne Rindell’s story of a 1920s police stenographer who becomes increasingly obsessed with a glamorous new typist reminds me at points of Notes on a Scandal and Patricia Highsmith, but has creepy charms all its own.”—The Paris Review

“Take a dollop of Alfred Hitchcock, a dollop of Patricia Highsmith, throw in some Great Gatsby flourishes, and the result is Rindell’s debut, a pitch-black comedy about a police stenographer accused of murder in 1920s Manhattan....A deliciously addictive, cinematically influenced page-turner, both comic and provocative.”—Kirkus Reviews (starred review)

“It's The Great Gatsby meets The Talented Mr. Ripley in this psychological thriller by first-time author Rindell.”—Los Angeles Public Library's Best Fiction of 2013

“With hints toward The Great Gatsby, Rindell’s novel aspires to recreate Prohibition-era New York City, both its opulence and its squalid underbelly. She captures it quite well, while at the same time spinning a delicate and suspenseful narrative about false friendship, obsession, and life for single women in New York during Prohibition.” —Booklist

“If you liked Gone Girl, you might enjoy [The Other Typist]...The best book I’ve read so far this summer.”—Greenwich Time

“This eerie and compelling debut is a riveting page-turner, narrated by a strangely hypnotic yet dubious young woman who works as a typist for the NYPD in the 1920s. Don’t start this novel at night if you need your beauty sleep—you’ll stay up to all hours devouring its pages.”—Alice LaPlante, New York Times bestselling author of Turn of Mind

“As you read this remarkable first novel you will feel the room temperature drop. It’s chilling till the very end.”—Rita Mae Brown, MFH, Author

“You could make a one-sitting read of The Other Typist: it maintains the riveting dance of question-provoking answers that earn page-turners their name, and Suzanne Rindell’s Jazz Age NYC is gritty, glamorous, and utterly absorbing....you’ll want to talk about The Other Typist.”—Alison Atlee, author of The Typewriter Girl

“Suzanne Rindell messes with your head. The Other Typist pretends to be the story of a nice young woman entering the cutthroat world of police work in 1920s New York. But it’s New York, not the nice young woman, who should be trembling. I had a blast reading this and had my nerves scrambled by the end.”—Victor LaValle, author of The Devil in Silver

“Best for those who can’t get enough of The Great Gatsby and the Roaring Twenties....This thrilling page-turner cinematically captures the opulence—and sordidness—of the Prohibition Era in New York.”—Shape.com

“A story of glamour, prohibition, obsession and corruption, with a fantastic Hitchcockian twist, The Other Typist is a great way to kick off a summer of reading.”—KMUW 89.1, Wichita Public Radio

“A thrilling riff on the classic noir and an impressive first novel.”—Christian Science Monitor

“[A] perfect social comedy: A plain young typist working for the New York Police Department in the 1920s becomes obsessed with a glamorous co-worker. Revealing that there is a murderous twist in Suzanne Rindell’s spellbinder isn’t a spoiler but an essential for enjoying the exhilarating buildup.”—Daily Candy

“With Rose as its sly and slightly unreliable narrator, this suspenseful story will keep you guessing.”—Bookpage

“Rindell is a fine writer, and she’s written a suspenseful and well executed novel. The Other Typist is an elegant debut.”—The Millions