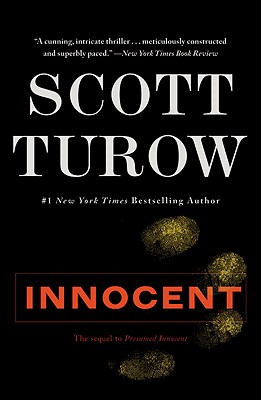 By Scott Turow
Email or call for price
Special Order is possible. Currently unavailable or possibly out of stock indefinitely. Please contact us before ordering.

The sequel to the genre-defining, landmark bestseller Presumed Innocent, INNOCENT continues the story of Rusty Sabich and Tommy Molto who are, once again, twenty years later, pitted against each other in a riveting psychological match after the mysterious death of Rusty's wife.

Scott Turow is the author of eleven bestselling works of fiction, including Identical, Innocent, Presumed Innocent, and The Burden of Proof, and two nonfiction books, including One L, about his experience as a law student. His books have been translated into more than forty languages, sold more than thirty million copies worldwide, and have been adapted into movies and television projects. He has frequently contributed essays and op-ed pieces to publications such as the New York Times, Washington Post, Vanity Fair, the New Yorker, and the Atlantic.

"Scott Turow's new novel is the dedicated fiction-reader's version of El Dorado: a driving, unputdownable courtroom drama/murder mystery that is also a literary treasure, written in language that sparkles with clarity and resonates with honest character insight. I came away feeling amazed and fulfilled, as we only do when we read novelists at the height of their powers. Put this one on your don't-miss list."
-Stephen King—-

"Mesmerizing prose and intricate plotting lift Turow's superlative legal thriller, his best novel since his bestselling debut, Presumed Innocent to which this is a sequel...Once again, Turow displays an uncanny ability for making the passions and contradictions of his main characters accessible and understandable.
—Publisher's Weekly, -