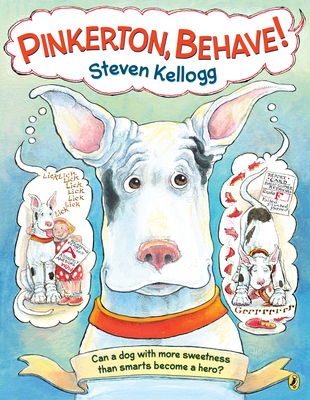 Pinkerton doesn't understand his owner’s commands. When told to come, he jumps out the window. When asked to fetch, he destroys the slippers instead. Pinkerton’s desperate owners take him to obedience school, but he flunks out in record time. Then one night a burglar breaks into their house, and Pinkerton is able to put his bad habits to good use.

This silly charmer of a story was included on the Booklist and Horn Book best of the year lists and inspired four sequels about the impossibly clueless but irresistibly sweet Pinkerton. Now, in honor of its 35th anniversary, Steven Kellogg has updated the art and text (most notably removing the gun that appeared in the original edition), and has written an introductory note about the book’s history.

Steven Kellogg is a beloved author and illustrator who has published than 100 picture books, including the classics The Mysterious Tadpole, Can I Keep Him?, The Island of the Skog, Is Your Mama a Llama?, and this book, Pinkerton, Behave!, which was on Horn Book and Booklist’s Best of the Year lists and led to four sequels. A winner of the Regina Medal for his lifetime contribution to children’s literature, Steven Kellogg’s books have received numerous accolades, such as being named Reading Rainbow featured selections and winning the Boston Globe-Horn Book Award, the Irma Simonton Black Award, the IRA-CBC Children’s Choice Award, and the Parents’ Choice Award.