The Foundations of Statistics (Dover Books on Mathematics) (Paperback) 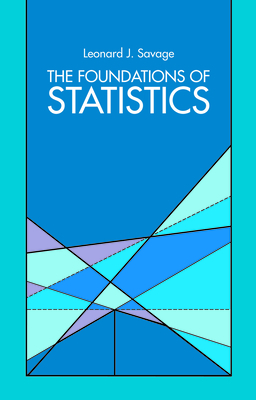 With the 1954 publication of his Foundations of Statistics, in which he proposed a basis that takes into account not only strictly objective and repetitive events, but also vagueness and interpersonal differences, Leonard J. Savage opened the greatest controversy in modern statistical thought. His theory of the foundations, connected with the personalistic interpretation of probability, challenged the then dominant frequentist school.
In the first seven chapters of his book, Professor Savage is concerned with the foundations at a relatively deep level. To explain and defend his theory of the behavior of a highly idealized person faced with uncertainty, he considers decision making, the sure-thing principle, qualitative and quantitative personal probability, the approach to certainty through experience, symmetric sequences of events, critical comments on personal probability, utility, observations as they affect the decision, and partition problems. In chapters eight through seventeen he discusses statistics proper -- the actual devices of the discipline -- from the personalistic view. He concentrates on minimax problems and on the theories of estimation and testing. Exercises are included throughout to reinforce and supplement the text. The mathematical techniques used are quite elementary, some calculus and elementary probability theory being presupposed. Understanding of all the material calls for some mathematical maturity on the part of the reader. Professor Savage had reevaluated his position somewhat during the decade and a half since the work was first published. While reaffirming the material in the first seven chapters, he had reconsidered the appropriateness of many frequentistic applications. To explain these recent developments, he added a new preface, new footnotes, and a supplementary 180-item, annotated bibliography. Because of Professor Savage's death, the revisions that he made for this edition are his final analysis of the situation.
As he says on page one, the foundations are the most controversial parts of many, if not all, sciences. In statistics, the foundation of probability is as controversial a subject as one could name. In 1954, the controversy was very great, and although it has quieted since, the problem has yet to be resolved. A new generation of readers who have missed Savage's analysis have here an opportunity to study firsthand what his important foundation of statistics -- personal probability -- is, and what it means to statistical thought.