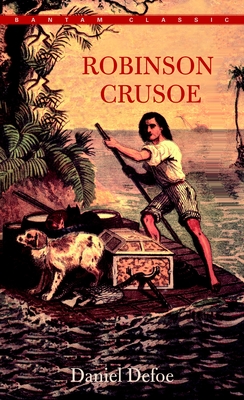 This classic story of a shipwrecked mariner on a deserted island is perhaps the greatest adventure in all of English literature. Fleeing from pirates, Robinson Crusoe is swept ashore in a storm possessing only a knife, a box of tobacco, a pipe-and the will to survive. His is the saga of a man alone: a man who overcomes self-pity and despair to reconstruct his life; who painstakingly teaches himself how to fashion a pot, bake bread, build a canoe; and who, after twenty-four agonizing years of solitude, discovers a human footprint in the sand... Consistently popular since its first publication in 1719, Daniel Defoe's story of human endurance in an exotic, faraway land exerts a timeless appeal. The first important English novel, Robinson Crusoe has taken its rightful place among the great myths of Western civilization.

Daniel Defoe was born Daniel Foe in London in 1660. It was perhaps, ineveitable that Defoe, an outspoken man, would become a political journalist. As a Puritan he believed God had given him a mission to print the truth, that is, to proselytize on religion and politics, and in fact, he became a prolific pamphleteer satirizing the hypocrisies of both Church and State. Defoe admired William III, and his poem The True-Born Englishman (1701) won him the King's friendship. But an ill-timed satire on High Church extremists, The Shortest Way with the Dissenters, published during Queen Anne's reign, resulted in his being pilloried and imprisoned for seditious libel in 1703.

At fifty-nine Defoe turned to fiction, completing The Life and Strange Surprising Adventures of Robinson Crusoe (1719), partly based on the saga of Alexander Selkirk, a Scottish sailor; Moll Flanders (1722); Colonel Jack (1722); A Journal of the Plague Years (1722); and Roxana or the Fortunate Mistress (1724).

“Beyond the end of Robinson Crusoe is a new world of fiction. Even though it did not know itself to be a ‘novel,’ and even though there were books that we might now call ‘novels’ published before it, Robinson Crusoe has made itself into a prototype . . . Perhaps because of all the novels that we have read . . . the novelty of Defoe’s fiction is the more striking when we return to it. Here it is, at the beginning of things, with its final word reaching out into the future.” –from the Introduction by John Mullan