Ageless Wisdom: A Treasury Of Quotes To Motivate and Inspire (Paperback) 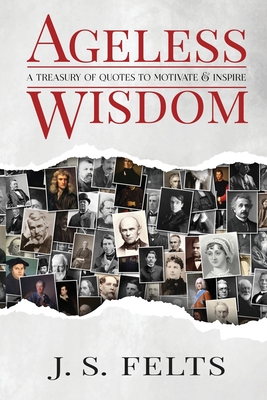 In almost every book we read, we find those few passages of wisdom, which stand up, stand out, and demand to be noticed; "One simile, that solitary shines in the dry desert of a thousand lines" as Alexander Pope once put it. Those are the ones we write down because we keep coming back to them time and time again. Over the last thirty years, I've done just that, and carefully arranged my quotation collection, into this book, Ageless Wisdom. This compilation of quotes is not meant to be the largest collection, but the wisest, which shares the greatest of thoughts; as George Eliot poetically wrote, "A book which hath been culled from the flowers of all books."

There's just something mesmerizing about being able to pick up one book, and having the wisdom of many of the world's greatest minds, at your immediate disposal. Ageless Wisdom is just that, a rich storehouse for those who love quotations. It contains a refreshing newness of quotes most have never been introduced to, not just another rearranging of old tired quotations. This quote collection, of nearly 600 pages, is arranged into six parts:

Inside these six parts, are quotations broken down into 128 categories from over 1000 sources, which were written over a 3,500-year period. Below are just a few of the many great authors who are quoted in this collection:

It's like having the wisdom, of an entire library of books, contained in a single volume. This is not just a collection to be used as a reader or reference, but a collection of wise quotes, to pause and meditate upon, to meet with those who are no longer alive, to relive history from a front row seat, to listen to many of the greatest minds who have ever lived, to take advice from the greatest of counselors, and to learn from many of the world's greatest teachers, all in this single volume called Ageless Wisdom: A Treasury of Quotes to Motivate & Inspire.

I hope you find this collection of quotes and sayings thought-provoking, and that it brings you many hours of reading enjoyment.