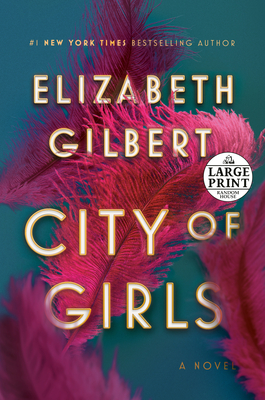 “City of Girls is a champagne cocktail, a tonic for anything that ails you, and the summer read you can’t miss! Vivian Morris, an upper-class, 19-year-old college dropout, finds herself in the chaotic New York City theater world of the 1940s. What ensues is a story full of sex, glamour, and witty one-liners that spans decades. All those who led a heedless youth or wish they had will fall for this book about growing into the person you’ve always wanted to be. Gilbert has written a glittering piece of fiction that subtly delivers wisdom about the nature of human connection and leaves the reader braver, freer, and, at least for the moment, happier.”
— Caroline McGregor, Books & Books, Coral Gables, FL

Elizabeth Gilbert is the #1 New York Times bestselling author of Big Magic, Eat Pray Love, and several other internationally bestselling books of fiction and nonfiction. Gilbert began her career writing for Harper’s Bazaar, Spin, the New York Times Magazine, and GQ, and was a three-time finalist for the National Magazine Award. Her story collection Pilgrims was a finalist for the PEN/Hemingway Award; The Last American Man was a finalist for both the National Book Award and the National Book Critics Circle Award. The follow-up memoir Committed became an instant #1 New York Times bestseller. Her novel, The Signature of All Things, was named a Best Book of 2013 by the New York Times, O Magazine, the Washington Post, the Chicago Tribune, and the New Yorker. Gilbert’s short fiction has appeared in Esquire, Story, One Story, and the Paris Review. Her new novel, City of Girls, will be released June 2019.