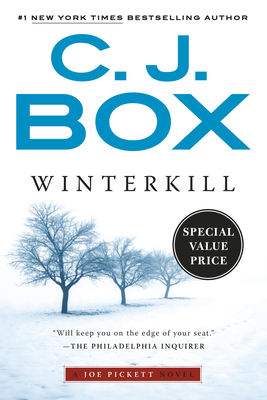 This is book number 3 in the A Joe Pickett Novel series.

Joe Pickett’s pursuit of a killer through the rugged mountains of Wyoming takes a horrifying turn when his beloved foster daughter is kidnapped in this thriller in the #1 New York Times bestselling series.

It's an hour away from darkness, a bitter winter storm is raging, and Wyoming Game Warden Joe Pickett is deep in the forest edging Battle Mountain, shotgun in his left hand, his truck's detached steering wheel handcuffed to his right--and an arrow-riddled corpse splayed against the tree in front of him. The apparent murder victim and the sudden onslaught of the snowstorm warn: Get off the mountain. But Joe knows this episode is far from over. And when his own daughter gets caught up in his hunt for the killer, Joe will stop at nothing to get her back...

C. J. Box is the author of twenty-one Joe Pickett novels, most recently Dark Sky; seven stand-alone novels, including The Bitterroots; and the story collection Shots Fired. He has won the Edgar, Anthony, Macavity, Gumshoe, and two Barry awards, as well as the French Prix Calibre .38 and a French Elle magazine literary award. His books have been translated into twenty-seven languages. He and his wife, Laurie, live on their ranch in Wyoming. He’s an executive producer of ABC TV’s Big Sky, which is based on his Cody Hoyt/Cassie Dewell novels, as well as executive producer of the upcoming Joe Pickett television series for Paramount Studios/Spectrum Originals.

“Winterkill proves that Box...is one of the best new voices in the mystery game. [It's] a full-fledged thriller, Wyoming style.”—Rocky Mountain News

“The writing is strong, the scenery vivid, and the characters complex.”—Houston Chronicle

“Box's characters shine as brightly as the environment. Joe is a hero, but he is also quite human....A nice contemporary spin on the old-fashioned western.”—The Philadelphia Inquirer