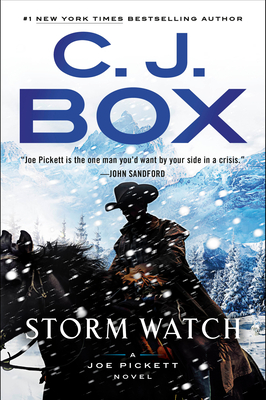 This is book number 23 in the A Joe Pickett Novel series.


When a prominent University of Wyoming professor goes missing, authorities are stumped. That is, until Joe Pickett makes two surprising discoveries while hunting down a wounded elk on his district as an epic spring storm descends upon him. First, he finds the professor’s vehicle parked on a remote mountainside. Then Joe finds the professor’s frozen and mutilated body. When he attempts to learn more, his investigation is obstructed by federal agents, extremists, and Governor Colter Allen.


Nate Romanowski is rebuilding his falconry company—and financing this through crypto mining with the assistance of Geronimo Jones. He’s then approached by a shadowy group of local militant activists that is gaining in power and influence, and demanding that Wyoming join other western states and secede from the union—by force, if necessary. They ask Nate to throw in with them, but he’s wary. Should he trust them, or is he being set up?


As a storm of peril gathers around them, Joe and Nate confront it in different ways—and maybe, for the first time, on opposite sides.

C. J. Box is the author of twenty-three Joe Pickett novels, eight stand-alone novels, and a story collection. He has won the Edgar, Anthony, Macavity, Gumshoe, and two Barry awards, as well as the French Prix Calibre .38, the Western Heritage Award for Literature, and two Spur Awards. An avid outdoorsman, Box has hunted, fished, hiked, ridden, and skied throughout Wyoming and the Mountain West. He is an executive producer of ABC TV’s Big Sky and Joe Pickett on Spectrum Originals and Paramount+, both of which are based on his novels.

"The suspense builds as the various story lines neatly intersect…Box is writing at the top of his game."
—Publishers Weekly (starred)

"Like a patient spider, Box plays out plotline after plotline, balancing his sympathies adroitly between anti-establishment libertarians who’ve had enough of the coastal elites and officers sworn to serve and protect their communities, before knotting them all together with a climactic revelation that for better or worse will leave you gasping. One of the most successful of Box’s increasingly ambitious have-it-all thrillers."
—Kirkus Reviews (starred)

"C.J. Box shows yet again why he’s one of the best storytellers alive today with Storm Watch, a riveting new adventure that features one of his best twists and most shocking endings yet. Trust me, whatever you do, do not miss this book."
—The Real Book Spy