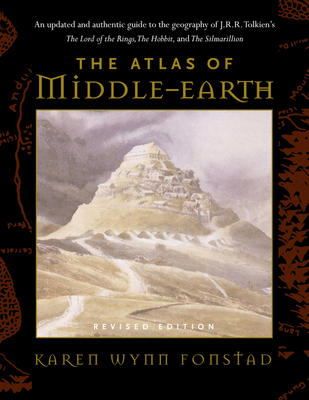 Karen Wynn Fonstad's THE ATLAS OF MIDDLE-EARTH is an essential volume that will enchant all Tolkien fans. Here is the definitive guide to the geography of Middle-earth, from its founding in the Elder Days through the Third Age, including the journeys of Bilbo, Frodo, and the Fellowship of the Ring. Authentic and updated -- nearly one third of the maps are new, and the text is fully revised -- the atlas illuminates the enchanted world created in THE SILMARILLION, THE HOBBIT, and THE LORD OF THE RINGS.
Hundreds of two-color maps and diagrams survey the journeys of the principal characters day by day -- including all the battles and key locations of the First, Second, and Third Ages. Plans and descriptions of castles, buildings, and distinctive landforms are given, along with thematic maps describing the climate, vegetation, languages, and population distribution of Middle-earth throughout its history. An extensive appendix and an index help readers correlate the maps with Tolkien's novels.

J.R.R. TOLKIEN (1892–1973) is the creator of Middle-earth and author of such classic and extraordinary works of fiction as The Hobbit, The Lord of the Rings, and The Silmarillion. His books have been translated into more than fifty languages and have sold many millions of copies worldwide.

Karen Wynn Fonstad, the author or The Atlas of Pern, The Forgotten Realms Atlas and other guides to fantasy worlds, is a noted cartographer. She lives in Wisconsin.

CHRISTOPHER TOLKIEN (1924–2020) was the third son of J.R.R. Tolkien. Appointed by Tolkien to be his literary executor, he devoted himself to the editing and publication of unpublished writings, notably The Silmarillion, Unfinished Tales, and The History of Middle-earth.