Empires of the Silk Road: A History of Central Eurasia from the Bronze Age to the Present (Paperback) 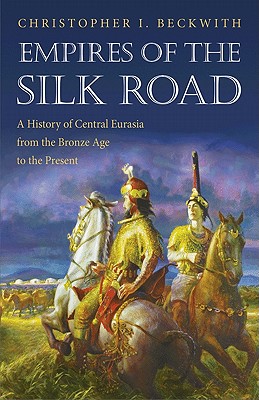 The first complete history of Central Eurasia from ancient times to the present day, Empires of the Silk Road represents a fundamental rethinking of the origins, history, and significance of this major world region. Christopher Beckwith describes the rise and fall of the great Central Eurasian empires, including those of the Scythians, Attila the Hun, the Turks and Tibetans, and Genghis Khan and the Mongols. In addition, he explains why the heartland of Central Eurasia led the world economically, scientifically, and artistically for many centuries despite invasions by Persians, Greeks, Arabs, Chinese, and others. In retelling the story of the Old World from the perspective of Central Eurasia, Beckwith provides a new understanding of the internal and external dynamics of the Central Eurasian states and shows how their people repeatedly revolutionized Eurasian civilization.

Beckwith recounts the Indo-Europeans' migration out of Central Eurasia, their mixture with local peoples, and the resulting development of the Graeco-Roman, Persian, Indian, and Chinese civilizations; he details the basis for the thriving economy of premodern Central Eurasia, the economy's disintegration following the region's partition by the Chinese and Russians in the eighteenth and nineteenth centuries, and the damaging of Central Eurasian culture by Modernism; and he discusses the significance for world history of the partial reemergence of Central Eurasian nations after the collapse of the Soviet Union.
Empires of the Silk Road places Central Eurasia within a world historical framework and demonstrates why the region is central to understanding the history of civilization.

Christopher I. Beckwith is professor of Central Eurasian studies at Indiana University. His other books include The Tibetan Empire in Central Asia (Princeton).