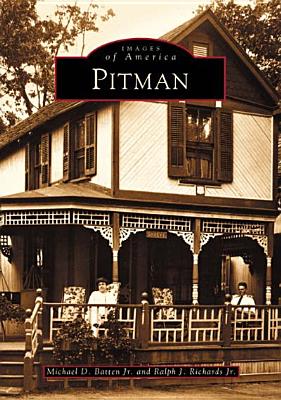 Originally organized in 1871 as a member of the New Jersey Conference Camp Meeting Association, Pitman was incorporated as a borough in 1905. The town was named after Rev. Charles Pitman, a well-known traveling Methodist minister who, in fact, had never been to Pitman. The borough evolved from a religious resort to a summer resort when Alcyon Park opened in 1892, but it retains its religious background. Even today, the Pitman Grove Auditorium is still holding camp meeting services on Sunday evenings during the summer months. Pitman includes vintage photographs documenting the growth of the borough from a tent city to its present hometown status. Included are scenes of a bygone era, such as those of the Alcyon Park area, early churches, the original downtown, and many buildings no longer in existence. Alcyon Park operated until the 1940s and Alcyon Track, one of the premier racetracks of its day, held events from 1895 until 1960. The Focer building, Dilks' Drug Store, and photographs of Pitman's fiftieth-anniversary celebration are also included. This history explores the growth of Pitman from its infancy to the early 1960s.