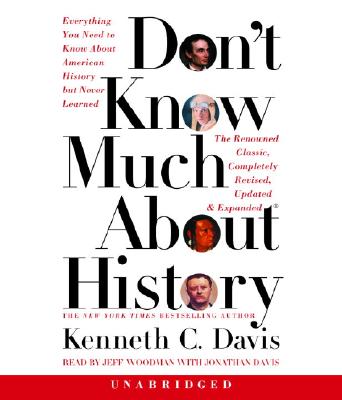 A new, completely revised, expanded and updated edition of the million-selling New York Times bestseller that launched the entire Don’t Know Much About® series.

When Don't Know Much About® History first appeared, it created a sensation. With humor, great stories, and a trademark conversational style, the book brought Americans a fresh new take on history. Davis proved Americans don't hate history–they just hate the dull version they were force-fed in school.

In his irreverent and popular question-and-answer style, Davis now returns with a completely revised edition that brings history right up to the moment–covering such topics as the end of the Cold War, Clinton's impeachment, the bizarre election of 2000, and the events that led to September 11.

Incorporation new research and discoveries, Davis also updates and expands on such long-standing American controversies as the Hiss trial, and he includes an expanded "civics-lesson" that examines some of America's hottest social and political issues, such as the death penalty and school prayer.

For history buffs and history-phobes alike, Davis proves once more why People magazine said that listening to him "is like returning to the classroom of the best teacher you ever had."