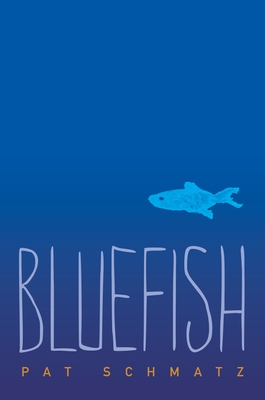 By Pat Schmatz
Email or call for price
Special Order is possible. Currently unavailable or possibly out of stock indefinitely. Please contact us before ordering.

“I loved this story about unlikely friends, each lonely and trapped by labels - trailer trash, brainy dork, and bluefish. I cared deeply about these characters, who are struggling not to be defined by their past expectations, and I cheered for their unconventional teacher who provoked them into seeing their future possibilities. A great book for fans of Katherine Hannigan and Gary Schmidt.”
— Ellen Davis, Dragonwings Bookstore, Waupaca, WI

Thirteen-year-old Travis has a secret: he can't read. But a shrewd teacher and a sassy girl are about to change everything in this witty and deeply moving novel.

Travis is missing his old home in the country, and he’s missing his old hound, Rosco. Now there’s just the cramped place he shares with his well-meaning but alcoholic grandpa, a new school, and the dreaded routine of passing when he’s called on to read out loud. But that’s before Travis meets Mr. McQueen, who doesn’t take “pass” for an answer — a rare teacher whose savvy persistence has Travis slowly unlocking a book on the natural world. And it’s before Travis is noticed by Velveeta, a girl whose wry banter and colorful scarves belie some hard secrets of her own. With sympathy, humor, and disarming honesty, Pat Schmatz brings to life a cast of utterly believable characters — and captures the moments of trust and connection that make all the difference.

Pat Schmatz is the author of three previous novels for teens. She lives in rural Wisconsin.

A lovely, understated book that celebrates the possibility of a kind and humane friendship between an eighth-grade girl and boy...this novel is also an ode to the significance of reading in the lives of young people and to a teacher who knows the power literature can wield. Unique and original, believable and poignant, this is a book with power of its own.
—The Horn Book (starred review)

Readers seeking emotional warmth, congenial humor, and an affirmation of forgiveness and friendship will cozy up to these characters.
—Bulletin of the Center for Children's Books (starred review)

Despite the weighty problems the characters face-grief, alcoholism, and bullying among them-Bluefish is a lively, often-humorous, and ultimately hopeful page-turner. It has all the hallmarks of a classic contemporary young adult issues novel. It's packed with memorable and believable characters and powered by the prospect of redemption and just a hint of romance.
—School Library Journal (starred review)

A young teen loner gradually learns to accept the friendship of an outspoken girl in this problem novel filled with likable, idiosyncratic characters.… A story rife with unusual honesty and hope.
—Kirkus Reviews

What makes Bluefish compelling is the unorthodox way the characters reveal their secrets and ultimately join forces to break hurtful social labels. Readers will identify with the middle school setting and the well-written characters.
—Library Media Connection

The story is well written and deals realistically with issues that plague many teens.
—Booklist Online

This inspiring novel demonstrates how two teens with survivor instincts and a little guidance from a couple of perceptive adults choose a different path than the one they were born into. Schmatz keeps their situation realistic while also emphasizing the importance of seizing opportunities when they present themselves.
—Shelf Awareness