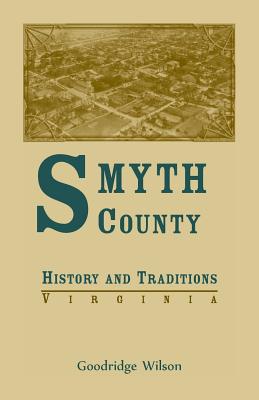 This work begins in the 1700s, prior to the county's establishment, and records interesting incidents and major historic events of the day, as well as the names and character of many early settlers. There are also rare documents such as Colonel John Buchanan's journal, William Campbell's letter to his wife, and the Tory warning to Campbell. The history then describes the first permanent settlement, and the tumultuous times of Dunmore's War and the American Revolution. Genealogical data and family history are woven into the narrative throughout the volume. This is a complete and relatively modern history, which includes aerial view photographs. Chapters include: Head of Holston Surveys, Col. John Buchanan's Journal, Permanent Settlement, Dunmore's War, The Revolution, County Organization, Political Notations, Churches, Schools, Newspapers, Industries, Banks, Transportation, The War between the States, Negroes of Smyth, World War, Southwestern State Hospital, Towns, Benjamin Franklin Buchanan, Villages and Communities, and Laurel Farm. The original index is retained and lists nearly any name or subject you will want to find.