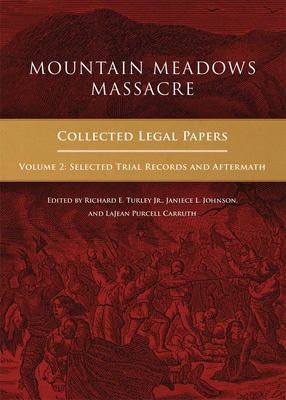 On September 11, 1857, a group of Mormons aided by Paiute Indians brutally murdered some 120 men, women, and children traveling through a remote region of southwestern Utah. Within weeks, news of the atrocity spread across the United States. But it took until 1874--seventeen years later--before a grand jury finally issued indictments against nine of the perpetrators. Mountain Meadows Massacre chronicles the prolonged legal battle to gain justice for the victims. The editors of this two-volume collection of documents have combed public and private manuscript collections from across the United States to reconstruct the complex legal proceedings that occurred in the massacre's aftermath. This exhaustively researched compilation covers a nearly forty-year history of investigation and prosecution--from the first reports of the massacre to the dismissal of the last indictment in 1896. Of special importance in Volume 2 are the transcripts of legal proceedings against John D. Lee--many of which the editors have transcribed anew from the shorthand. The two trials against Lee led to his confession, conviction, and ultimately his execution on the massacre site in 1877, all documented in this volume. Historians have long debated the circumstances surrounding the Mountain Meadows Massacre, one of the most disturbing and controversial events in American history, and painful questions linger to this day. This invaluable, exhaustively researched collection allows readers the opportunity to form their own conclusions about the forces behind this dark moment in western U.S. history.