Incognegro: A Memoir of Exile and Apartheid (Paperback) 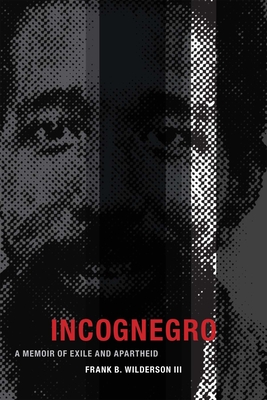 In 1995, a South African journalist informed Frank Wilderson, one of only two American members of the African National Congress (ANC), that President Nelson Mandela considered him "a threat to national security." Wilderson was asked to comment. "Incognegro" is that "comment." It is also his response to a question posed five years later in a California university classroom: "How come you came back?" Although Wilderson recollects his turbulent life as an expatriate during the furious last gasps of apartheid, "Incognegro" is at heart a quintessentially American story. During South Africa's transition, Wilderson taught at universities in Johannesburg and Soweto by day. By night, he helped the ANC coordinate clandestine propaganda, launch psychological warfare, and more. In this mesmerizing political memoir, Wilderson's lyrical prose flows from unspeakable dilemmas in the red dust and ruin of South Africa to his return to political battles raging quietly on US campuses and in his intimate life. Readers will find themselves suddenly overtaken by the subtle but resolute force of Wilderson's biting wit, rare vulnerability, and insistence on bearing witness to history no matter the cost.

Frank B. Wilderson III is Professor of African American Studies and Drama at the University of California, Irvine. He is the author of Red, White and Black: Cinema and the Structure of U.S. Antagonisms, also published by Duke University Press.