The Yugoslav Auschwitz and the Vatican (Hardcover) 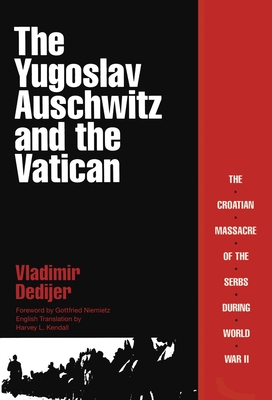 By Vladimir Dedijer
$55.99
Not available

First-hand testimony of survivors and eyewitnesses is compiled in this shocking and graphic account of the crimes committed during World War II at the largest death camp in Yugoslavia. At the small Croatian town of Jasenovac, the fascist "Independent State of Croatia" (a satellite state of the Nazi Third Reich) constructed a concentration camp where more than 200,000 people, mostly Orthodox Serbs, were systematically murdered. Among the participants in this genocide were members of the Roman Catholic Clergy, from the Franciscan monk who became the camp commandant to the infamous Archbishop Stepinac, the spiritual advisor to the fascist state appointed by Pope Pius XII.

Vladimir Dedijer, a close associate of Marshall Tito, has collected irrefutable documentary and photographic evidence, attesting to thousands of atrocities and the complicity of the Catholic Church in these crimes. The events described in this important volume provide a historical context to the recent conflict in Yugoslavia and shed light on the motivations behind the apparently senseless ethnic and religious strife which tore Yugoslavia apart. The massacre at Jasenovac was the terrible culmination of centuries-old animosities between Orthodox Serbs and Catholic Croats, and a dark episode in the history of the Church, one that the Church has attempted to hush up for fifty years.

The late Vladimir Dedijer held many high state offices in the government of Yugoslavia, including the post of official delegate from Yugoslavia to the United Nations. He was considered a leading authority on genocide in the twentieth century and, together with Jean-Paul Sartre, chaired the Bertrand Russell International Tribune on War Crimes. Dedijer was also a highly-respected scholar of modern history, who taught in universities throughout the world, and the author of many books, among which is his widely acclaimed biography of Tito.