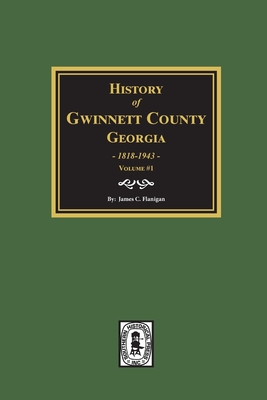 Gwinnett County was created in 1818 from Jackson County and lands gained through the cession of Creek Indian lands. It lies in the north-central part of the state. This book is similar to other books of the era, discussing such topics as: Indians, Creation of the county, commerce, education, georgraphy, politics and etc. But the reader will discover very useful things interspersed throuout this book such as: Muster rolls of Militia from 1813-1814; Lists of First Taxpayers 1820; Census of 1820; Lists of Lottery Drawers in Gwinnett for the 4th, 5th, 6th and 7th Districts; along with Gwinnett citizens who drew lots in Monroe and Houston Counties; Lists of First Settlers; Early Court Records 1821-1850; list of Gwinnett citizens who drew land in the 1832 Cherokee Land Lottery; List of 1835 & 1840 Pensioners; Lists of owners of Slaves 1820, 1840, 1850, & 1860; Lists of Plantation owners who owned more than 500 acre, and Names of Gwinnett County citizens who served in various Companies during the Civil War along with data on the ones who died during service. The author has also included biographical sketches of some early residents of the county: Adair (2), Anthony, Arnold, Baugh, Beasley, Berry, Bracewell, Brown, Camp, Chester, Cupp, Garmany, Gordon, Hale, Hall, Hawthorne, Hopkins, Howell, Hudson, Hutchins, Jackson, King, Laurence, Liddell (2), Lietch, Loveless, Malthie, Martin, Nesbit, Pruett, Rambo, Richardson, Rogers, Russell, Sammon, Save, Smith, Spencer, Stuart, Thomas, Whitworth (2), Williams, and Wilson.