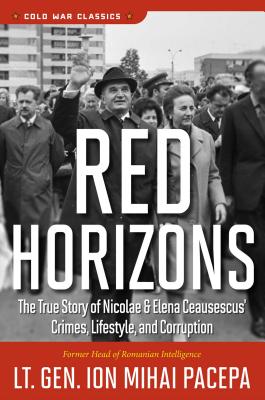 In 1987, Lt. Gen. Ion Mihai Pacepa, the highest ranking defector ever from the Eastern bloc, published RED HORIZONS, his expose of the unchecked power and corruption of Nicolae Ceausecu, then the Romanian President and Romanian Communist Party General Secretary, and his wife, Elena. Pacepa’s intention was to bring down the Ceausescu regime and liberate his daughter, whom he had to leave behind in Romania.

When Ceausescu was told of Pacepa’s defection, he suffered a nervous breakdown and ordered Pacepa killed. Ceausescu’s murder squads never succeeded in tracking down Pacepa, who remained in hiding in the U.S.

Not long after the publication of RED HORIZONS, Radio Free Europe and Radio Liberty began their campaigns to broadcast the book into Romania.

On Christmas Day, 1989, Nicolae and Elena Ceausescu were executed by military forces who had joined the Romanian people in a spontaneous revolt against one of the most oppressive regimes in the world, bringing an abrupt end to 24 years of Communist tyranny.

On December 26, 1989, Truth, the Romanian daily newspaper which had declared itself free, began printing excerpts from RED HORIZONS. The editors’ preface to these excerpts said:

“What can be read in the pages of this book appears to be the fruit of a sick fantasy and yet, every word is true. The publication of this book played an uncontested role in revealing in all its hideousness the true face of a dictatorship, which with diabolical cunningness had managed to outfox a part of the world."

LT. GEN. ION MIHAI PACEPA was the highest ranking official ever to defect to the United States from the former Soviet Bloc. Before defecting, he was a two-star general in the Securitate--Communist Romania’s secret police--and served as President Nicolae Ceausescu’s advisor, chief of foreign intelligence, and a state secretary of Romania’s Ministry of Interior. Forced to remain in hiding, Pacepa authored six books before his death in 2021.