The Sabres of Paradise: Conquest and Vengeance in the Caucasus (Paperback) 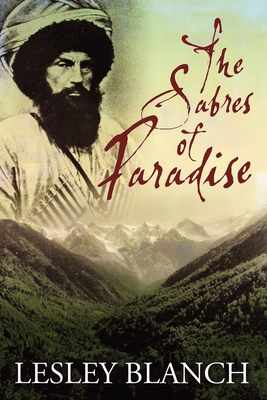 The Sabres of Paradise was first published in 1960, a hundred years after the story it recounts had ended. The Soviet Union was at the height of its power and the Caucasus had been coerced into submissive conformity by the brutalities of Stalin. Today, the narrative is a lot more relevant - post-Vietnam, post-Afghanistan, post-Soviet Union and post-September 11. A dramatist by training, Lesley's Blanch's bold work of narrative non fiction - the definitive biography of Imam Shamyl - builds the story scene by scene of two worlds brought into sudden juxtaposition. It is the product of six years of diligent and scholarly research done in Russia and the Caucasus, including tracing his descendants in Turkey and Egypt. During the Caucasian Wars of Independence of 1834-1859, the warring mountain tribes of Daghestan and Chechnya united under the charismatic leadership of the Muslim chieftain known as the 'Lion of Daghestan'. For years, Shamyl defied his enemy, the Tsar, who had taken his eldest son as a hostage to St Petersburg. Shamyl captured in turn two Georgian princesses (from the Tzarina's entourage), a French governess, and the children, and kept them in his harem until they could be exchanged for his son. Also a historical narrative, there are beautiful descriptions of the Caucasus - a region of supreme natural beauty and mighty mountain ranges - and the campaigns in which Lermontov and Tolstoy participated. BRIAN ALDISS ― "A book as thick with flavour as roast wild boar, tusks and all. One of the most nutritious books I have ever read." PHILIP MARSDEN ― "Like Tolstoy's, her sense of history is ultimately convincing not because of any sweeping theses, but because of its particularities, the quirks of individuals and their personal narratives, their deluded ambitions, their vanities and passions." HAMISH BOWLES in Jacqueline Kennedy: The White House Years ― "Jacqueline Kennedy and Khrushchev maintained a spirited badinage through dinner. Mrs Kennedy had recently read The Sabres of Paradise, Lesley Blanch's dashing history of the Muslim tribes' resistance to Russian expansionism in the Caucasus, and attempted to engage the Soviet premier in conversation on the subject. He responded with the comparative numbers of teachers per capita in the Soviet and Czarist Ukraine. She cut him off with the playful riposte, "Oh, Mr Chairman, don't bore me with statistics." NEW YORK TIMES BOOK REVIEW ― "I can imagine no better introduction to modern Russia." LE MONDE ― "A magnificent historical drama; a marvellous, impassioned biography of Imam Shamyl." AUTHOR BIO Lesley Blanch was a distinguished writer, artist, drama critic, and features editor of British Vogue during World War Two. In 1946 she sailed from England to travel the world with her diplomat-novelist husband, Romain Gary. By the time they reached Hollywood in the 1950s they were literary celebrities. Their marriage of eighteen years ended when Gary left her for the young actress, Jean Seberg. Blanch headed East to travel across Siberia, Outer Mongolia, Turkey, Iran, Samarkand, Afghanistan, Egypt, the Sahara. Born in 1904, she died aged 103, having gone from being a household name to a mysterious and neglected living legend. The author of twelve books, including Journey into the Mind's Eye, Pierre Loti, The Sabres of Paradise, and Round the World in Eighty Dishes, her memoirs - On the Wilder Shores of Love: A Bohemian Life - are published by Virago and La Table Ronde in France. A follow up volume of writings Far To Go and Many To Love: People and Places is published by Quartet Books.

A scholarly romantic, Lesley Blanch (1904-2007) influenced and inspired generations of writers, readers and critics. She was a distinguished writer, artist, drama critic and features editor of British Vogue during World War II. Blanch was well ahead of her time and prescient in the way she attempted to bridge West and East - especially the West and Islam. In an interview with Shusha Guppy, she revealed that 'General de Gaulle wrote me a lovely letter about The Sabres of Paradise, and I have heard that he said it was remarkable that a woman should be able to understand the battles so well and describe them so vividly.' The author of twelve books, including The Wilder Shores of Love, Journey into the Mind's Eye, Pierre Loti and one novel, The Nine Tiger Man, she died in 2007. Her memoirs On the Wilder Shores of Love: A Bohemian Life are published by Virago. To learn more about Lesley, visit her website at www.lesleyblanch.com