A Most Remarkable Creature: The Hidden Life and Epic Journey of the World's Smartest Birds of Prey (Hardcover) 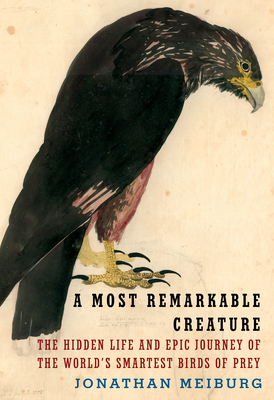 “A fascinating, entertaining, and totally engrossing story.”—David Sibley, author of What It's Like to Be a Bird

“Utterly captivating and beautifully written, this book is a hugely entertaining and enlightening exploration of a bird so wickedly smart, curious, and social, it boggles the mind.”—Jennifer Ackerman, author of The Bird Way

“As curious, wide-ranging, gregarious, and intelligent as its subject.”—Charles C. Mann, author of 1491

An enthralling account of a modern voyage of discovery as we meet the clever, social birds of prey called caracaras, which puzzled Darwin, fascinate modern-day falconers, and carry secrets of our planet's deep past in their family history.

In 1833, Charles Darwin was astonished by an animal he met in the Falkland Islands: handsome, social, and oddly crow-like falcons that were "tame and inquisitive . . . quarrelsome and passionate," and so insatiably curious that they stole hats, compasses, and other valuables from the crew of the Beagle. Darwin wondered why these birds were confined to remote islands at the tip of South America, sensing a larger story, but he set this mystery aside and never returned to it.

Almost two hundred years later, Jonathan Meiburg takes up this chase. He takes us through South America, from the fog-bound coasts of Tierra del Fuego to the tropical forests of Guyana, in search of these birds: striated caracaras, which still exist, though they're very rare. He reveals the wild, fascinating story of their history, origins, and possible futures. And along the way, he draws us into the life and work of William Henry Hudson, the Victorian writer and naturalist who championed caracaras as an unsung wonder of the natural world, and to falconry parks in the English countryside, where captive caracaras perform incredible feats of memory and problem-solving. A Most Remarkable Creature is a hybrid of science writing, travelogue, and biography, as generous and accessible as it is sophisticated, and absolutely riveting.

In 1997, Jonathan Meiburg received a Thomas J. Watson Fellowship to travel to remote communities around the world, a year-long journey that sparked his enduring fascination with islands, birds, and the deep history of the living world. Since then, he's written reviews, features, and interviews for print and online publications including The Believer, The Talkhouse, and The Appendix on subjects ranging from a hidden exhibit hall at the American Museum of Natural History to the last long-form interview with author Peter Matthiessen. But he's best known as the leader of the band Shearwater, whose albums and performances have often been praised by NPR, The New York Times, The Guardian, and Pitchfork. He lives in central Texas.

“If caracaras were able to read—and immersing myself in Mr. Meiburg’s vivid prose I sometimes fancied they just might be—this book would give them a lot of information about that exceptional creature named Jonathan Meiburg.”—Christoph Irmscher, Wall Street Journal

“Like travel itself, A Most Remarkable Creature is more journey than destination. While Meiburg seems disinclined toward environmental preaching, he does want to ignite our curiosity. The book elegantly reminds us that we cheat ourselves when we underestimate creatures we have deemed low, annoying or common.”—Karen Sandstrom, The Washington Post

“Meiburg's voice is poetic; where other nature writers are known for the images they paint of landscapes, here are presented impressions, concepts as complex as species' movements over geologic time, in a way that is at once clear and beautiful.”—Anna Morris, NPR.org

“To call this a bird book would be like calling Moby-Dick a whaling manual. . . Meiburg’s book is full of good seeing and the good writing that comes from it.”—Sam Hodges, Dallas Morning News

“Meiburg is an enormously skilled writer, and even if you've never heard of striated caracaras, you're likely to be drawn in by his enthusiasm and elegant prose.”—Michael Schaub, Star Tribune

“A Most Remarkable Creature is much more than a scientific profile. It is a grand intellectual adventure involving dinosaurs, DNA, naturalists, exploration and survival. Meiburg is a gifted storyteller, and one can't help but fall under the same spell he did.”—Lauren O’Brien, Shelf Awareness

“Meiburg lodges the caracara so deeply in readers’ hearts that by the end of the book, they will feel ready to participate in whatever scheme he proposes to save this peculiar dinosaur-descendant.”—Anna Spydell, BookPage (starred review)

“Meiburg elevates himself to the top ranks of science writers with this enthralling debut . . . Meiburg’s evocative prose will bring armchair naturalists into the wild with him. Fans of literary nature narratives will be thrilled by his lyrical account, and eager to see where Meiburg goes next.”—Publishers Weekly (starred review)

“Meiburg’s enthusiasm [for the caracaras] matches Darwin’s, and readers will share it. . . Not only a fine writer, the author is clearly an adventurer, and he devotes entertaining chapters to treks into the high Andes and South American jungles in search of other caracara species. . . [A] wholly captivating natural history.”—Kirkus Reviews (starred review)

“In this wonderful combination of travelogue (it makes one want to visit the Falklands), history of science (Henry Hudson was quite the naturalist), and natural history, the reader will meet a bird of prey that. . . [is] truly the most mischievous of all feathered creation.”—Nancy Bent, Booklist (starred review)

“More than anything else, rock musician Jonathan Meiburg’s book A Most Remarkable Creature . . . seems so attuned to the personalities, intelligences, and feelings of the animals he encounters. . . It’s a humble, grateful book, full of wonderful ornithological knowledge.”—Olivia Rutigliano, Lit Hub

“Abounding with intriguing characters and too-close-for-comfort wildlife encounters, the book is an enrapturing tale about the unfolding evolutionary drama of our planet.”—Corryn Wetzel, Audubon

“With striking prose and talon-sharp wit, the book delivers on [Meiburg’s] lofty ambitions. After reading it, I found myself looking at birds differently, as well as the world at large and humans’ relationship to it.”—Bryan C. Parker, Texas Monthly

“Meiburg’s writing possesses that rare, and very readable, ability to tread surely between the studious and the conversational. . . The feeling one is left with is of having spent a rather wonderful evening in the company of someone both extremely knowledgeable and at ease with that knowledge.”—Will Burns, Caught by the River

“[Meiburg] takes readers from the fog-bound coasts of the Falklands to tropical forests in Guyana to falconry parks in the English countryside, where captive caracaras perform incredible feats of memory and problem-solving.”—Matt Mendenhall, Bird Watching Daily

“Jonathan Meiburg vividly brings to life not only a nearly shaman-like character – the striated caracara – but also the world that opens when you look at the raptor. It’s a riveting work of natural history, human exploration, and evolutionary detection.”—Michael S. Hopkins, Christian Science Monitor

“[Meiburg] takes our known world and spins it on its head, revealing complexities and wonders about not just the field of ornithology, but the planet and humankind as well so that we might be inspired to continue seeking out the unknowns in order to discover something new.”—Miyako Pleines, Chicago Audubon Society

“Like any good book about a single bird species, this one combines adventure, travel, mystery and science.”—Jim Williams, Minneapolis Star Tribune

“Utterly captivating and beautifully written, this book is a hugely entertaining and enlightening exploration of a bird so wickedly smart, curious, and social, it boggles the mind. Along the way, Meiburg takes us from the Falklands to the UK, from Guyana to the Antarctic and Florida, and from deep time to the present and back again, describing in brilliant language why these birds--and their planet--are the way they are. If you love birds, natural history, science, travel, adventure, or just great writing, you will be rapt.”—Jennifer Ackerman, author of The Bird Way

“A fascinating, entertaining, and totally engrossing story of these under-appreciated birds, deftly intertwining natural history and human history, and with insights and lessons that go far beyond the subject birds.”—David Sibley, author of What It's Like to Be a Bird

“This book is an evolutionary labyrinth, taking Meiburg to the end of the world following a single, curious predator. Vivid, beautiful, and scientifically rich, crawling with jungle ants, blasted by Antarctic winds, his tales will transport you from the page to wilder places.”—Craig Childs, author of Atlas of a Lost World

“A Most Remarkable Creature does what only the very best science and nature writing can. Jonathan Meiburg reminds us that our world is not fully known, that the prehistoric walk among us, and, most of all, how exciting and unnerving it feels to encounter an animal you’ve never seen before, and, even more, to find that animal staring right back.”—Steven Rinella, author of American Buffalo: In Search of a Lost Icon

“A rich, sprawling romp through time and far-flung, fabulous spaces, in pursuit of one of Earth’s most enigmatic, engaging, and shrewdest creatures.”—Alan Weisman, author of Countdown

“I’m in love with this book. If you like great writing, strange historical twists, adventure, nature, music and/or birds this will quickly become one of your all-time favorite books.”—Laurie Anderson, artist

“Caracaras are not like other birds, or even other birds of prey. Curious, wide-ranging, gregarious, and intelligent, the ten species of caracara are a scientific puzzle that has intrigued biologists since the days of Darwin. And this book--as curious, wide-ranging, gregarious, and intelligent as its subject--is not like any other book that I have encountered. A Most Remarkable Creature is not only about a bird, but about the community of people that has formed, almost accidentally, around the bird, and beyond that about humankind itself.”—Charles C. Mann, author of 1491

“What a remarkable feat: taking a mysterious, oddly social, keenly intelligent bird of prey that most of the world has never heard of and animating the creature with such beauty that it comes fully alive in our imaginations. Jonathan Meiburg went on an equatorial search for the latter-day descendants of the age-old caracara and brought back--a little like Darwin himself--travel report, documentary, biography, social history, scientific treatise. And all of it so wonderfully readable.”—Paul Hendrickson, author of Hemingway's Boat: Everything He Loved in Life, and Lost