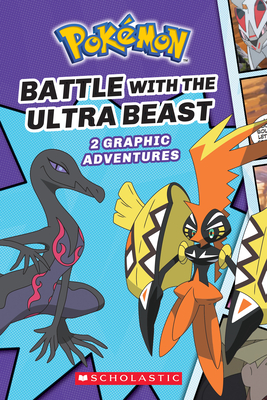 This is book number 1 in the Pokémon series.

Gotta catch all the Pokémon action in this fun new graphic novel! All the adventure and humor of the animated TV series spring to life in this thick 128-page, full-color comic-style book.Kids who love Pokémon won't want to miss this cool comic compilation! This 128-page, full-color graphic novel includes two stories jam-packed with adventure and Pokémon battles.First, Ash is determined to help his friend's mom who has been taken by a mysterious Ultra Beast through an Ultra Wormhole! But when he finally reaches her, only a Z-move can get her back. Is Ash up for the challenge?Then, Ash takes on his first assignment as an Ultra Guardian on an action-packed Ultra mission!With tons of art on every page from the animated show airing on Disney XD, this comic book is the perfect new format for Pokémon fans.

SIMCHA WHITEHILL lives in New York City, but has spent much of her career in the world of Pokémon. A graduate of New York University, she began working on the American show production team, has had a hand in developing games for the brand, and authored over two dozen Tomes about Ash, Pikachu, and their crew. Like most fans, Simcha shares the mantra, “Gotta catch ’em all.” In addition to Pokémon, Simcha has also written for Disney and Nickelodeon.