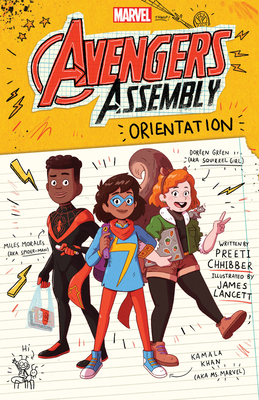 A diverse cast of characters -- Kamala Khan (Ms. Marvel), Miles Morales (Spider-Man), and Doreen Green (Squirrel Girl) -- team up in their first-ever middle-grade series told through comics, in-world artifacts, and more!Kamala Khan was an average middle school kid. That is, until a cloud called a Terrigen Mist swept through the New Jersey waterfront and activated her super powers! After taking on the persona of Ms. Marvel, she's been fighting crime in Jersey City, and has caught the eye of some pretty well-established super heroes. But that's not always a good thing...After Kamala is caught by news cameras taking on a super villain -- and accidentally destroying a building along the way -- she gets a letter from Captain Marvel herself! It's great that she's fighting crime and sticking up for people, but maybe a regular school isn't the best place to learn how to do that. If she wants to continue as Ms. Marvel, she's going to need to take on some new extracurricular activities -- mainly, training with other young super heroes alongside the Avengers!Now Kamala is the new kid at the Avengers Institute. Her classmates are all kids like her, they have special powers, but most of them have gotten into some trouble or drawn attention to themselves. The big news at the Avengers Institute this year? An academic decathlon in which students will group up into teams and compete against each other in super heroics. Kamala and her friends Miles and Doreen will have to go up against a team led by some kids who fight less than fair -- and have some trouble with the concept of "fighting for good" -- in this funny, action-packed look at some ordinary middle school kids who just happen to have some extraordinary powers.

Preeti Chhibber has written for SYFY, BookRiot, BookRiot Comics, The Nerds of Color, and The Mary Sue. She has work in the anthology A Thousand Beginnings and Endings, a collection of retellings of fairy tales and myths, and is the author of the Spider-Man: Far from Home tie-in Peter and Ned's Ultimate Travel Journal for Marvel. She hosts the podcasts Desi Geek Girls and Strong Female Characters (SYFYWire) and has appeared on several panels at New York Comic Con, San Diego Comic Con, and on screen on the SYFY Network.
James Lancett is a London-based illustrator, director, and yellow sock lover! As a child growing up in Cardiff, he was obsessed with cartoons, video games, and all things fantasy. As he grew up and became a lot more beardy these inspirations held strong and so he moved to London to earn his BA Illustration and Animation at Kingston University. This degree opened the door to a job he had dreamt of ever since he was a kid and he now works as an illustrator and animation director.