Don't Know Much About® the American Presidents (Paperback) 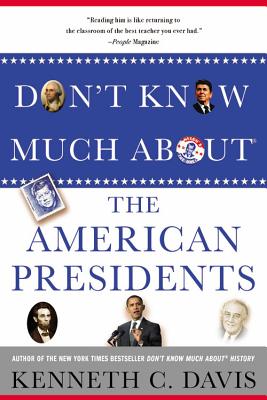 Which president broke the law to prevent enslaved people from being freed? Who said, "When the president does it,that means it's not illegal"? Why does America have a president?

From the heated debates among the framers of the Constitution in 1787 over an "elected king," to the creation of the presidency, and on through rich profiles of each man who has held the office, New York Times bestselling author Kenneth C. Davis takes readers on a guided tour of American history. Examining each chief executive, from the low lights to the bright lights, the memorable to the forgettable and the forgotten, Davis tells all the stories, offering rich anecdotes about real people. He also charts the history of the presidency itself, debunking myths and grading the presidents from A+ to F.

For history buffs and history-phobes alike, this entertaining book may change your understanding of the highest office in the land throughout more than two hundred years of history.

Kenneth C. Davis is the New York Times bestselling author of the Don't Know Much About® series with more than four million copies in print worldwide. Davis is a frequent media guest on national television and radio; he has written for the Op-Ed page of the New York Times, and been a commentator on NPR's All Things Considered. He posts regularly at DontKnowMuch.com and makes "virtual visits" to schools, libraries, and other audiences.

PRAISE FOR DON'T KNOW MUCH ABOUT HISTORY

PRAISE FOR DON'T KNOW MUCH ABOUT THE AMERICAN PRESIDENTS

"Don't Know Much About the American Presidents by Kenneth C. Davis contains a plethora of information about the men who have held our nation's highest office. If you read it you will be enriched."—Dayton Daily News