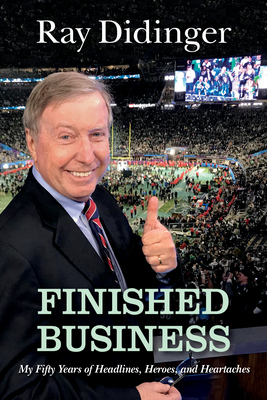 Ray Didinger opens his lively memoir Finished Business with the Philadelphia Eagles’ upset win in Super Bowl LII. When the Eagles finally hoist the Lombardi Trophy, Didinger does his best to straddle the emotions of a working reporter and a long-suffering Philly fan. His ability to do that is why he has built up such a loyal following.

Didinger began following the Eagles as a kid, hanging out in his grandfather’s bar in Southwest Philadelphia. He spent his summers at the team's training camp in Hershey. It was there he met his idol, flanker Tommy McDonald. He would later write a play, Tommy and Me, about their friendship and his efforts to see McDonald enshrined in the Pro Football Hall of Fame.

Didinger has been covering the Eagles as a newspaper columnist or TV analyst since 1970. Over the years, he wrote sports for the Philadelphia Bulletin and the Philadelphia Daily News. He later produced Emmy Award–winning documentaries for NFL Films before transitioning to sports talk radio and TV analysis.

In five decades, across multiple media platforms, he has interviewed everyone from Hank Aaron, Wayne Gretzky, Muhammad Ali, Julius Erving, Jack Nicklaus, to Mike Schmidt, as well as writing film scripts for Hollywood stars such as Bruce Willis and Alec Baldwin. He went to the White House with the U.S. Olympic team and even explored the bizarre world of professional wrestling.

His stories, told in his familiar, breezy style, capture his enthusiasm for sports and his affection for the fans who still mourn the pennant that eluded the Phillies in 1964. Didinger has become synonymous with Philadelphia sports, and his memoir is as passionate as an autumn Sunday at Lincoln Financial Field.

Ray Didinger was the first print journalist inducted into the Philadelphia Sports Hall of Fame. As a columnist for the Philadelphia Bulletin and the Philadelphia Daily News, he was named Pennsylvania Sportswriter of the Year five times. In 1995, he won the Dick McCann Award for long and distinguished reporting on pro football, and his name was added to the writers’ honor roll at the Pro Football Hall of Fame. He also won six Emmy Awards as a writer and producer for NFL Films. He has authored or co-authored eleven books including The Eagles Encyclopedia, One Last Read: The Collected Works of the World's Slowest Sportswriter (Temple) and The Ultimate Book of Sports Movies. His play, Tommy and Me, about his friendship with Eagles Hall of Famer Tommy McDonald, was produced by Theatre Exile in Philadelphia and premiered in 2016. He is a talk show host on 94 WIP Sports Radio and a football analyst for NBC Sports Philadelphia.