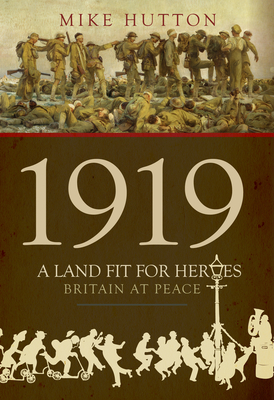 Often regarded as just a footnote to World War I, 1919 is largely ignored in our haste to enter the dizzy world of the roaring twenties. But it was a year of real significance and change. Many who had been employed in factories and offices found their jobs had been taken on by women for lower rates of pay, and wealthy aristocrats found servants were in short supply. Worse, a new class of men who had made their fortunes during the war was frequenting the grandest hotels. Increased taxation, lack of housing, unemployment, and a continuation of the Spanish flu epidemic added to the general air of gloom. An outbreak of strikes led to troops and tanks appearing on the streets of our leading industrial cities. Perhaps the arrival of Dixieland jazz was a sign of better times to come, with the "Bright Young Things" waiting in the wings to take center stage. There was still entertainment to be had. Sport provided a popular outlet, and long queues formed outside picture houses to see the latest silent films. Theaters and music halls played to packed houses. All aspects of life 100 years ago are examined to mark the beginning of the period described by Robert Graves as “The Long Weekend”—from fashion to criminality, from royalty to the Empire.

Mike Hutton is a history author. Before retiring to devote his time to writing, he was MD of a leading textile company. He has spent many years researching archives concerning Britain after World War I.