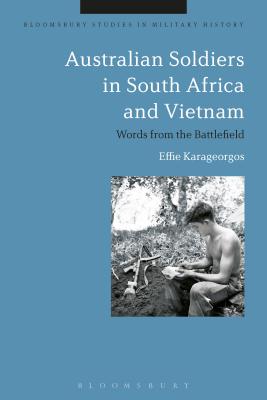 The South African and Vietnam Wars provoked dramatically different reactions in Australians, from pro-British jingoism on the eve of Federation, to the anti-war protest movements of the 1960s. In contrast, the letters and diaries of Australian soldiers written while on the South African and Vietnam battlefields reveal that their reactions to the war they were fighting were surprisingly unlike those on the home fronts from which they came.

Australian Soldiers in South Africa and Vietnam follows these combat men from enlistment to the war front and analyses their words alongside theories of soldiering to demonstrate the transformation of soldiers as a response to developments in military procedure, as well as changing civilian opinion. In this way, the book illustrates the strength of a soldier's link to their home front lives.

Effie Karageorgos is a Tutor in the School of Historical and Philosophical Studies at the University of Melbourne, Australia.