Blood Moon: An American Epic of War and Splendor in the Cherokee Nation (Paperback) 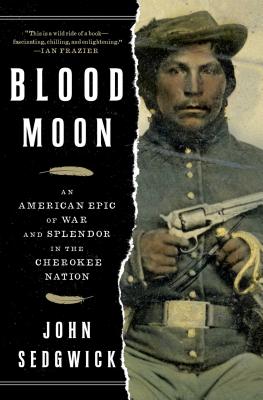 An astonishing untold story from the nineteenth century—a “riveting…engrossing…‘American Epic’” (The Wall Street Journal) and necessary work of history that reads like Gone with the Wind for the Cherokee.

“A vigorous, well-written book that distills a complex history to a clash between two men without oversimplifying” (Kirkus Reviews), Blood Moon is the story of the feud between two rival Cherokee chiefs from the early years of the United States through the infamous Trail of Tears and into the Civil War. Their enmity would lead to war, forced removal from their homeland, and the devastation of a once-proud nation.

One of the men, known as The Ridge—short for He Who Walks on Mountaintops—is a fearsome warrior who speaks no English, but whose exploits on the battlefield are legendary. The other, John Ross, is descended from Scottish traders and looks like one: a pale, unimposing half-pint who wears modern clothes and speaks not a word of Cherokee. At first, the two men are friends and allies who negotiate with almost every American president from George Washington through Abraham Lincoln. But as the threat to their land and their people grows more dire, they break with each other on the subject of removal.

In Blood Moon, John Sedgwick restores the Cherokee to their rightful place in American history in a dramatic saga that informs much of the country’s mythic past today. Fueled by meticulous research in contemporary diaries and journals, newspaper reports, and eyewitness accounts—and Sedgwick’s own extensive travels within Cherokee lands from the Southeast to Oklahoma—it is “a wild ride of a book—fascinating, chilling, and enlightening—that explains the removal of the Cherokee as one of the central dramas of our country” (Ian Frazier).

Populated with heroes and scoundrels of all varieties, this is a richly evocative portrait of the Cherokee that is destined to become the defining book on this extraordinary people.

John Sedgwick is the bestselling author of Blood Moon: An American Epic of War and Splendor in the Cherokee Nation, and twelve other books: four works of literary nonfiction, two novels, a family memoir, and five collaborations.  He has also written extensively for The Atlantic, GQ, Newsweek, Esquire, and Vanity Fair. He is married to the CNN analyst and Financial Times columnist Rana Foroohar, and lives in Brooklyn, New York.

“With powerful, graceful prose, John Sedgwick brings to life a haunting, largely forgotten tale about the Cherokee, one of the most storied tribes in American history.”
—Candice Millard, author of The River of Doubt and Destiny of the Republic

“This is a wild ride of a book—fascinating, chilling, and enlightening—that explains the removal of the Cherokee as one of the central dramas of our country. The story of the Trail of Tears, and of its aftermath in Arkansas and Oklahoma, has never been told with more passion or finesse. Parts of it read like a nonfiction True Grit. I found Blood Moon to be an unputdownable read.”
—Ian Frazier, author of Great Plains and On the Rez

“The most important history to know is the history that has been deliberately hidden from us. John Sedgwick’s absorbing and ultimately damning story of the destruction of the Cherokee Nation—so that white settlers could pour in and take over their rich lands—finally unearths the ugly but quintessentially American truth about our young nation’s path to expansionism.”
—Rinker Buck, author of The Oregon Trail and First Job

“John Sedgwick has captured and brought to life one of the most dramatic untold stories of nineteenth-century America: the forty-year blood feud waged between two proud and powerful Cherokee chiefs that instigated the notorious Trail of Tears and shaped the sorrowful history of the tribe even more than the reviled President Andrew Jackson. Sedgwick has been blessed with the historian’s essential gifts—the compelling ability to produce a page-turning saga combined with the insight into a tragedy that is still keenly felt today.”
—Bob Drury and Tom Clavin, authors of The Heart of Everything That Is and Lucky 666

“A vigorous, well-written book that distills a complex history to a clash between two men without oversimplifying.”
—Kirkus Reviews