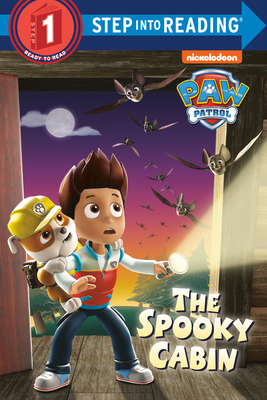 When Nicklelodoen's PAW Patrol uncover a ghostly mystery in an old cabin, Rubble, Rocky, and Chase are on the case. Boys and girls ages 4 to 6 will thrill to this Step 1 Step into Reading leveled reader that's perfect for Halloween and features more than 30 shiny stickers. Step 1 Readers feature big type and easy words. Rhymes and rhythmic text paired with picture clues help children decode the story. For children who know the alphabet and are eager to begin reading.

Get on the case with Nickelodeon’s PAW Patrol! Chase, Marshall, Rubble, Skye, and the rest of the puppy heroes are on a mission to save their friends and protect the community of Adventure Bay using their paw-some vehicles, tools, and teamwork.

Established in July 2013 in a merger between Penguin and Random House, Penguin Random House, with nearly 250 independent imprints and brands on five continents, more than 15,000 new titles published each year, and close to 800 million print, audio, and eBooks sold annually, is the world’s leading trade book publisher. Like its predecessor companies, Penguin Random House is committed to publishing adult and children’s fiction and nonfiction print editions and is a pioneer in digital publishing. Its publishing lists include more than 60 Nobel Prize laureates and hundreds of the world’s most widely read authors.

Jason Fruchter has been an animator and illustrator for children's media for decades. He graduated from the Rhode Island School of Design with a BFA in 1992, and later moved to New York City to work for MTV Animation. In 2001, he cofounded A&J Studios, and has worked with Cartoon Network, Disney, Nickelodeon, and Sanrio. His books include Callie’s Cowgirl Twirl, Christmas Countdown, and Alphabet Magic. He lives in Seattle, Washington.