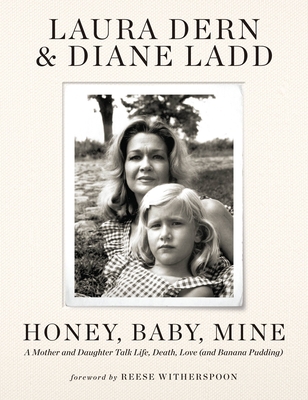 A collection of deeply personal conversations from award-winning actress and activist Laura Dern and the woman she admires most, her mother—legendary actress Diane Ladd.

What happens when we are brave enough to speak our truths to the ones we love the most?

Laura Dern and Diane Ladd always had a close relationship, but the stakes were raised when Diane developed a sudden life-threatening illness. Diane’s doctor prescribed long walks to build back her lung capacity. The exertion was challenging, and Laura soon learned the best way to distract her mom was to get her talking and telling stories.

Their conversations along the way began to break down the traditional barriers between mothers and daughters. They discussed the most personal topics: love, sex, marriage, divorce, art, ambition, and legacy. In Honey, Baby, Mine, Laura and Diane share these conversations, as well as reflections and anecdotes, taking readers on an intimate tour of their lives. Complementing these candid exchanges, they have included photos, family recipes, and other mementos. The result is a celebration of the power of leaving nothing unsaid that will make you want to call the people you love the most and start talking.

Laura Dern is an award-winning actress, producer, creator, and activist. She has received a number of accolades, including an Academy Award, an Emmy, and five Golden Globe Awards. Dern is also a passionate environmentalist.

Diane Ladd is an international award-winning actress, receiving a BAFTA Award, a Golden Globe Award, and Women of the Year award. She is a three-time Oscar and three-time Emmy nominee, having appeared in more than 187 film and television shows. She is a director, writer, producer, and author with degrees in esoteric psychology/nutrition, a lifetime member of the Actors Studio, and on the National Board of Directors for SAG/AFTRA.