To End a Plague: America's Fight to Defeat AIDS in Africa (Hardcover) 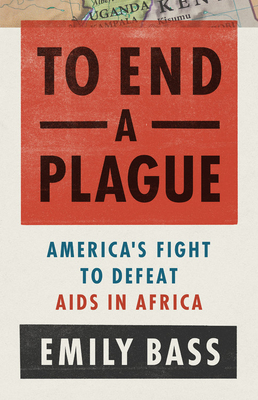 Shortlisted for the Lionel Gelber Prize

“Randy Shilts and Laurie Garrett told the story of the HIV/AIDS epidemic through the late 1980s and the early 1990s, respectively. Now journalist-historian-activist Emily Bass tells the story of US engagement in HIV/AIDS control in sub-Saharan Africa. There is far to go on the path, but Bass tells us how far we’ve come.” —Sten H. Vermund, professor and dean, Yale School of Public Health

With his 2003 announcement of a program known as PEPFAR, George W. Bush launched an astonishingly successful American war against a global pandemic. PEPFAR played a key role in slashing HIV cases and AIDS deaths in sub-Saharan Africa, leading to the brink of epidemic control. Resilient in the face of flatlined funding and political headwinds, PEPFAR is America’s singular example of how to fight long-term plague—and win.

To End a Plague is not merely the definitive history of this extraordinary program; it traces the lives of the activists who first impelled President Bush to take action, and later sought to prevent AIDS deaths at the whims of American politics. Moving from raucous street protests to the marbled halls of Washington and the clinics and homes where Ugandan people living with HIV fight to survive, it reveals an America that was once capable of real and meaningful change—and illuminates imperatives for future pandemic wars. Exhaustively researched and vividly written, this is the true story of an American moonshot.

Emily Bass has spent more than twenty years writing about and working on HIV/AIDS in America and East and Southern Africa. Her writing has appeared in numerous books and publications including Foreign Policy, TheWashington Post, The Lancet, Esquire, and n+1, and she has received a notable mention in Best American Essays. A lifelong social justice activist, Bass has served as an external expert for the World Health Organization and a member of the What Would an HIV Doula Do collective. She is the recipient of a Fulbright journalism fellowship and a Martin Duberman Visiting Research Fellowship from the New York Public Library. She lives in Brooklyn with her family.

“Readers with a background in the subject will consider this essential.”—Publishers Weekly

“With 25 years of experience as an AIDS activist, journalist Bass makes a vivid book debut with a detailed recounting of a prevention program that effectively stemmed AIDS in Africa…A timely history of successful government intervention.”—Kirkus Reviews

"Massive in scope and detail, Bass's crucial if at times dense tome could not be more timely.”—Booklist

“Bass has written a memory map of activism; a love song to a generation that insisted that African lives mattered. Told with compassion and grit, this is a searing story of a generation of women warriors."—Sisonke Msimang, author of Always Another Country

“Emily Bass reveals a vast and intricate web of cause and effect that spans the globe. A must-read for citizens of countries at the receiving end of donor aid.”—Doreen Baingana, author of Tropical Fish

With the sustained rhetorical power of a seasoned journalist and the nuance of a social theorist, Emily Bass drops us into America’s decades-long war on ‘AIDS in Africa.’ Essential reading for everyone who hopes that the scattershot production of vaccine will meaningfully end the current plague.”—Cindy Patton, author of Sex and Germs

“Emily Bass’s granular account tracks what happened after the American media klieg light shifted away from AIDS, without sacrificing poetry to mountains of data.”—Avram Finkelstein, founding member of the Silence=Death collective

“To End A Plague is a triumph, the sort of masterful, commanding work that comes around only once in a great while. Wonderful and wildly important—a landmark work that will endure.”—Martin Duberman, distinguished professor emeritus of history, CUNY

“The book must be on every US President’s table at the Oval Office to remind them of their commitment to continue foreign aid for good, be it for AIDS, COVID-19, or tuberculosis.”—Lancet

“Fascinating…nicely balances accounts of the debate over [PEPFAR] and the difficulties in running it with the reflections of the Africans [Bass] met on the frontlines of the battle against [AIDS].”—Foreign Affairs

“The resonance of that advice speaks to the astonishing scope of Bass's reporting and the honesty of her writing, but particularly her scrupulousness in rooting her conclusions in the experiences of HIV/AIDS activists and the people who built and benefited from PEFPAR.”—Andrew Green, Lancet