Geronimo Stilton 3-in-1 #5: Collecting "The Fastest Train in the West," "First Mouse on the Moon," and "All for Stilton, Stilton for All!" (Geronimo Stilton Graphic Novels #5) (Paperback) 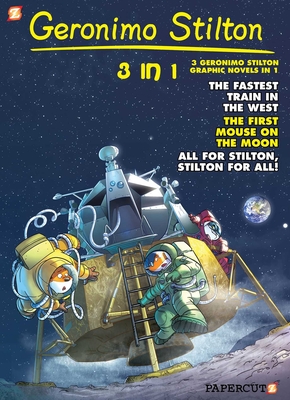 This is book number 5 in the Geronimo Stilton Graphic Novels series.

The hit Scholastic chapter book series has been successfully adapted into the best-selling graphic novel series from Papercutz. As Geronimo continues to garner new fans from his animated adventures, Papercutz proudly collects 3 Geronimo Stilton graphic novels in 1 specially priced paperback! Geronimo Stilton and friends travel back to the past in the Speedrat to save the future from dastardly Pirate Cats: First they head to the invention of the steam engine and the development of the railroads and the wild, wild West! Then, blast off for adventure as Geronimo Stilton becomes the “First Mouse on the Moon.” Finally, hop in your speed rat and head back in time to age of the Mouse-kateers in France, can they save King Louis XIII before the Pirate Cats cause a French Revolution? Fun and educational, Geronimo Stilton has a huge fan following and thanks to the new animated series, that following is growing all the time!