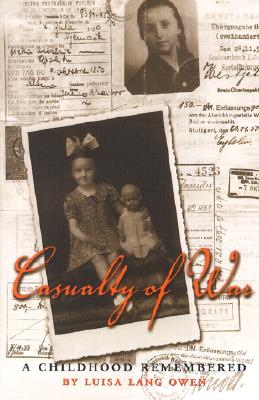 Not all casualties of war die on the battlefield. In the wake of World War II, Yugoslavia purged its territory of the ethnic Germans who had formed a part of its human mosaic. Tarred with their ethnic origins and the conscription of their fighting-age men into the Waffen SS, the Volksdeutsche, as these settlers were called, were rounded up at the war's end and herded into concentration camps. Those who were not murdered or did not die from the harsh conditions were expelled from the village homes their families had known and loved for three hundred years. Nine years old when she entered the concentration camp in 1945, author Luisa Lang Owen survived the persecution of the Danube Swabians, eventually finding herself in America, where she made a new life for herself, a life that nonetheless held within it the memories and lessons of the atrocities she had experienced in her homeland. Like thousands of other Germans in the Danube Valley at the end of the war, Luisa and her family were chased from their home, lodged in a sheep stall, and resettled in camps with other Germans from her village. Shorn of their possessions, given little food or fuel, pressed into hard labor, beaten by guards, and separated from their families, many despaired and many died. Luisa barely survived as others succumbed to malnutrition, disease, and exposure. Her haunting memoir provides a window into the ethnic cleansing that preceded the recent exterminations in Bosnia and Kosovo by fifty years—an episode of horrors that has not appeared as even a footnote in descriptions of the more recent atrocities practiced in that region. Her testament, as a casualty of war, bears historic witness and gives insight into the personal experiences of ethnic cleansing. It stands as witness to a massive crime that has been conveniently forgotten, a corrective to a bit of neglect that did away with its victims as a people, and a personal depiction of what ethnic cleansing is really about. “The problem was not just that they did not want us to have or to be,” Luisa Lang Owen writes, “they wanted us not to have been.”

Luisa Lang Owen, born in Yugoslavia before the war, came to America in 1951. A practicing artist who lives in Yellow Springs, she is a professor emerita of art education at Wright State University, Dayton, Ohio.

“The Village Within Us is an absorbing firsthand account of a neglected episode in the history of World War II and its immediate aftermath–the ethnic cleansing of the Vojvodina region of Yugoslavia by the brutal resettlement of its German-speaking minority. Luisa Lang, an artistically gifted nine-year-old when her story begins, takes us unblinkingly from the idyllic village life of her pre-war childhood through the fatal stages of her family’s descent into the maelstrom of war–the Nazi occupation, the Russian occupation, and finally the total devastation under Tito’s Partisans, who forcibly removed the thousands of Vojvodina Germans from their homes and transported them to concentration camps where they were essentially left to starve, often without rations for weeks at a time. Luisa’s riveting, intensely personal story of survival, filled with unforgettable images of both horror and beauty, brings to life as never before the inhumanities that can be visited upon innocent noncombatants in an atmosphere of ethnic hatred; but it also teaches us much about the resilience and promise of the human spirit.”--James P. Scanlan, Professor Emeritus of Philosophy, Ohio State University
— James P. Scanlan, Professor Emeritus of Philosophy, Ohio State University