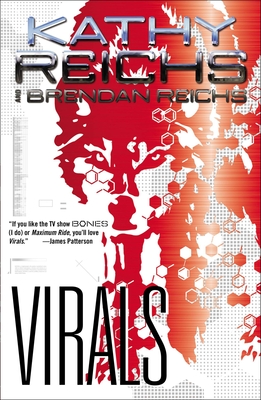 This is book number 1 in the Virals series.

“Kathy Reichs, well known in the adult world for her Temperance Brennan mysteries, has given Dr. Brennan a niece! Tory is smart, intuitive, and psyched to get to the bottom of the mystery surrounding Coop, the wolf-dog. When her friends start manifesting some dog-like tendencies after being exposed to an experimental virus, the race for answers gets even scarier. This fast-paced adventure takes some unusual twists and keeps the reader turning the pages.”
— Margaret Brennan Neville, The King's English, Salt Lake City, UT

Adventure is in Tory Brennan's blood. After all, she’s the grandniece of world-famous forensic anthropologist Temperance Brennan. Always up for a challenge, Tory and her science-geek friends spend their time exploring the marshlands of Loggerhead Island, home to the very off-limits Loggerhead Island Research Institute, where something strange is going on. After rescuing a stray wolfdog pup from a top-secret lab, Tory and her friends are exposed to a rare strain of canine parvovirus, changing them--and their DNA--forever. Now they are more than friends. They are a pack. They are Virals. And they're dangerous to the core. But are they unstoppable enough to catch a cold-blooded murderer?

Kathy Reichs (www.kathyreichs.com), like her iconic character Dr. Temperance Brennan, is a board-certified forensic anthropologist, and creator of the Fox television hit Bones, now in its eighth season. Reichs has written fourteen books in the Temperance Brennan series, all New York Times bestsellers. Virals is her first of three novel for young readers (www.viralstheseries.com).

Brendan Reichs (www.brendanreichs.com) was born and raised in Charlotte, North Carolina. He graduated from Wake Forest University in 2000 and The George Washington University School of Law in 2006. After three long years working as a litigation attorney, he abandoned the trade to co-write the Virals series. He lives in Charlotte with his wife, Emily, daughter, Alice, and son, Henry. He plans to keep writing novels until they drag him from his desk.