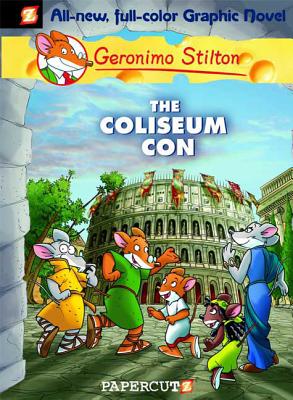 This is book number 3 in the Geronimo Stilton Graphic Novels series.

The Pirate Cats are up to no good again! This time, Bonzo and company travel to Rome, Italy in the year 80 AD to the opening of the Colosseum, Rome's largest amphitheater. The evil felines want the world to think it was they who designed the Coliseum, and infiltrate the Senate by posing as nobility. Geronimo and friends must hop into their speedy time machine and expose the cats' wily plot, all the while taking in historical landmarks and breathtaking moments of history.

Stilton was awarded the Ratitzer Prize for his scoops on The Curse of the Cheese Pyramid and The Search for Sunken Treasure. He has also received the Anderson 2001 Prize for Personality of the Year. One of his bestsellers won the 2002 eBook Award for world's best ratling electronic book. In 2006 he won the Nickelodeon Kids Choice Awards and in 2008 he won the Cartoomics prize 'Beyond Comics'. His works have been published all over the globe.In his spare time, Mr. Stilton collects antique cheese rinds. But what he most enjoys is writing books where he tells his fabmouse adventures!